Exploring Ocean Life and Color on the Internet
A new NASA Internet tool called "Giovanni" allows high school and college students and researchers to access and analyze satellite-derived ocean color data. Ocean color data provides students with information about ocean biology by looking at phytoplankton through changes in the color of the ocean surface. 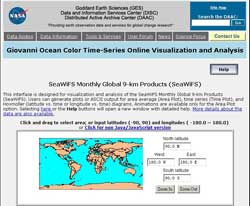 Image to right: Giovanni for Internet Users: Giovanni provides users with an easy-to-use, Web-based interface for visualization and analysis of ocean color data. Users can generate plots or ASCII file output for area-average, time-series, and latitude vs. time or longitude vs. time diagrams. Click on image to enlarge. Credit: NASA

"Ocean color" refers primarily to the measurement of the green pigment called chlorophyll, which is contained in phytoplankton. Phytoplankton are free-floating plants that are the foundation of the ocean's food chain. 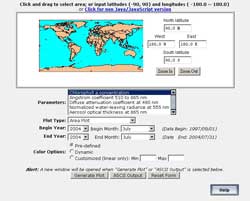 Image to left: Another screen capture of the Giovanni system. Click on image to enlarge. Credit: NASA 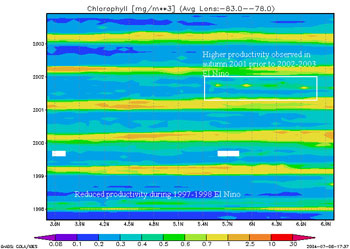 "In creating these tutorials, I discovered features in the data that were a complete surprise," Acker said. "The tutorials show how to use Giovanni, and how students can use it to make new discoveries, potentially contributing to ocean science."

In the first tutorial, Dr. Acker looked at the chlorophyll patterns in the Gulf of Panama to see if they were influenced by El Nino/La Nina events. The Gulf of Panama has a strong seasonal pattern caused by strong winds that blow through the Panama Canal Zone in winter. The winds mix nutrients from deeper waters to the surface, and the nutrients promote phytoplankton growth. The strong 1997-1998 El Nino reduced the productivity, or how much phytoplankton grow in this region, as expected. 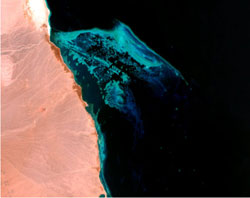 In the summer of 2001, however, there were short bursts of higher productivity not seen in other years. This unusual pattern may have been an early indicator of how the Gulf of Panama changed before the moderate El Nino event that occurred in 2002-2003.

The second tutorial investigated seasonal patterns of productivity in the Red Sea. There were two seasonal patterns in the Red Sea, one in the north and another in the south. Though these patterns are familiar to oceanographers, Giovanni provided another surprise. "I saw a very small area of relatively high chlorophyll concentrations near the Egyptian coast," Acker said. "At first it looked like a small river was entering the Red Sea. But there aren’t any rivers in this part of the desert." Further investigation indicated that this area was associated with a large coral reef complex on the Red Sea coast. A third tutorial examines the California coast near Monterey Bay, and discusses the influence of clouds on the data. 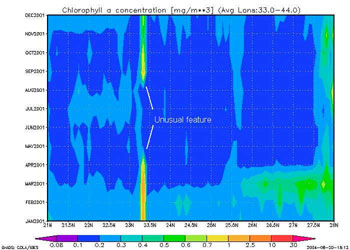 Image above: Looking at Chlorophyll in Latitude Versus Time: Giovanni created this latitude versus time graph for the northern Red Sea in the year 2001. The "unusual feature" is a small area of higher chlorophyll concentration that appears in the winter, spring, and autumn, but disappears in the summer. Click on image to enlarge. Credit: NASA

In the past, researchers had to download data files and analyze them on their own computing systems, a difficult and time-consuming process. Giovanni is one of the first demonstrations of new technology that will be improved in the future, making it much easier to use the data, including the multi-decade data sets that the Ocean Color Time-Series Project will create. 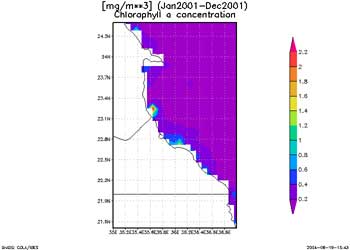 Image above: The Red Sea: Giovanni generated this image of the area in the Red Sea. SeaWiFS data for the year 2001 were averaged to make this image.  The seasonal appearance of higher chlorophyll concentrations may indicate that winds blow sediments containing chlorophyll away from the coastal Mirear Island reef into deeper Red Sea waters. Click on image to enlarge. Credit: NASA

For more information on this release: