Happy 100th to the Woman Who Helped Create NASA 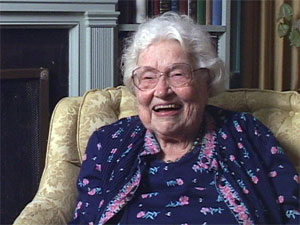 When Eilene Galloway was born, the Wright Brothers' historic flight was less than three years old. Now, as she turns 100, she can claim credit for helping to create the agency that landed humans on the moon and is planning to send them back.

Galloway began work with the Congressional Research Service of the Library of Congress in 1941, creating House and Senate documents including a report on "Guided Missiles in Foreign Countries," released just before the Soviets launched Sputnik in October 1957.

In 1958, then-U.S. Senator Lyndon B. Johnson asked her to help with Congressional hearings that led to the creation of NASA and America's entry into the Space Race. "The only thing I knew about outer space at that time," she said, "was that the cow had jumped over the Moon."

Galloway helped write the legislation that created the National Aeronautics and Space Act, which in turn led to the birth of NASA on October 1, 1958. Her work emphasized international cooperation and peaceful exploration. Later, she served as America’s representative in drafting treaties governing the exploration and uses of outer space and launched the field of space law and international space law. She also served on nine NASA Advisory Committees.

She sat down with NASA TV this week to talk about her experience and turning 100.

+ National Aeronautics and Space Act
› Back To Top