NASA Hits a Hole-In-One
How are NASA and golf related? Ask the professional golfers using clubs made from NASA's space-age technology.

NASA needed stronger, more durable materials for its space missions. A landmark discovery was made during a research project with vitrified metals in 1992.

A vitrified metal is a frozen liquid that fails to crystallize during solidification, combining the properties of glass and metal not found in nature. Liquidmetal is a new class of vitrified metals and is known as metallic glass. Also called Vitreloy®, Liquidmetal is an alloy blend more than twice as strong as titanium, but softer and more elastic. 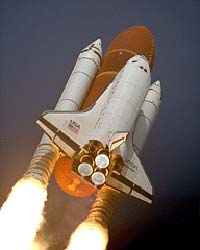 The product has been strengthened since its discovery and now goes by the name trademarked LiquidMetal. Licensed to a company in Lake Forest, Calif., Liquidmetal® golf clubs were the first commercial application of NASA's technology. The product has dozens of other potential commercial uses, including wrist watches, cellular phones and industrial machinery.

Image left: Experiments on how the Liquidmetal alloy performs in space have been tested onboard several Shuttle missions and the International Space Station. Image credit: NASA

As a nation we have progressed because of innovations to basic materials. In the 1800's, Sir Henry Bessemer of England invented a process to mass-produce steel inexpensively. During the 1900's, chemists invented thermo-plastics. You don't have to look far to see the impact plastics have had on our lives. This NASA-related technology appears to have the same potential.

A major breakthrough for the 21st century, the Liquidmetal alloy, is being considered to replace titanium in medical instruments, cars, the military and aerospace industry. For those with an active lifestyle, this NASA-based technology has recently expanded to the construction of recreational equipment such as tennis rackets, bicycle frames, baseball bats and more.