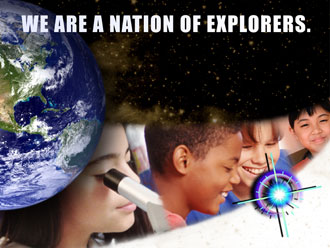 School just got a lot more interesting for thousands of students across the United States.

NASA has named 50 new Explorer Schools in 34 states, part of a major NASA education effort to inspire the next generation of explorers that may one day venture to the moon, Mars and beyond. (More on The Vision for Space Exploration)

A full list of the 2004 schools is posted on the NASA Explorer Schools Web site.

Each year, the NASA Explorer Schools (NES) program partners 50 school teams with NASA for a three-year period to participate in real-life experiences that inspire and excite students' imaginations. The goal is to spark their interest in pursuing careers in science, technology and engineering. The program also sends science and math teachers "back to school" at NASA centers during the summer to acquire new resources and technology tools.

"We're counting on the next generation of explorers to help carry the torch of exploration to the farthest regions of the universe," said NASA Administrator Sean O'Keefe. "There used to be a saying that the sky is the limit. Well, in this first year of the second century of flight, the sky and the heavens are not the limit, but rather the starting point of our exploration adventures."

NASA's education effort has brought back the excitement of teaching and learning about math, science and technology to the classroom. Students learn right along with scientists as they gather data from experiments currently being performed on the International Space Station and by the Mars Exploration Rovers Spirit and Opportunity. (+ Latest on the Rovers)

During the week, Walt Disney's Epcot Center hosted a group of approximately 250 teachers and students for a day at the park centering on the main attraction, Mission: SPACE. The students had a "blast" inside the X-2 capsule that simulated a launch into space, using joysticks and buttons while looking at "outer space" on their video screens. ( + More on Mission: SPACE) 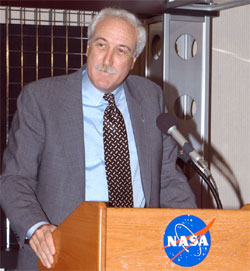 Catherine Graves, the NASA Explorer School team leader from Lorain, Ohio, spoke to the group about the positive change and excitement in the community brought about by the program.

"There's possibility where others have seen the impossible, and the dream of our children can be inspired by the hope and promise space exploration gives to our future," Graves said. "Thank you hardly seems enough for everything the NES program has done for our students, teachers, our school, and the community of Lorain. You truly have inspired us and shown us that no dream is impossible."

The Explorer Schools Program is sponsored by NASA's Education Enterprise in collaboration with the National Science Teachers Association.