Path of Totality: The Movie
On March 29, 2006, a NASA-led science expedition traveled to Tripoli and then the Sahara desert to witness and study -- first hand -- a total solar eclipse. This international expedition was an unprecedented collaboration with Libyan scientists and researchers from across the globe. 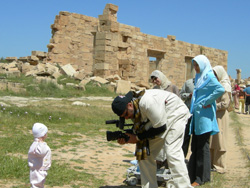 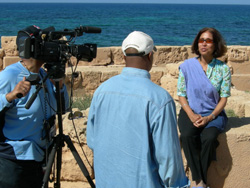 Image above left: NASA TV on location taping Libyan citizens near the Libyan Coast. In the background, are some of the remnants of the ancient Roman City of Leptis Magna. Credit: NASA (+ Download High Res (.7 Mb .jpg)) Image above right: On location filming one of the numerous interviews for the documentary. Madhulika Guhathakurta, NASA program scientist in Washington, was one of the featured scientists in the film. In the background, is the breathtaking Mediterranean Sea. Credit: NASA (+ Download High Res (.2 Mb .jpg))

NASA's Office of Public Affairs, Washington, D.C., produced a high definition video documentary of the expedition and its interactions with Libya academics and government officials. Entitled Path of Totality, the film debuted on Sept. 20, 2007, in Washington.

The expedition was funded and coordinated by the Heliophysics offices at NASA Headquarters, Washington, the Goddard Space Flight Center, Greenbelt, Md., and the U.S. Department of State. The Heliophysics Program seeks to explore the Sun-Earth system to understand the sun and its effects on Earth, the solar system, and the space environmental conditions that will be experienced by explorers, and to demonstrate technologies that can improve future operational systems.

Total solar eclipses are of special interest to astronomers, because it is the only time the sun's corona can be seen from the Earth's surface. Observers can detect and measure properties of the sun’s outer atmosphere, such as temperature, density and chemical composition when the light of the disk is blocked by the moon.

The 2006 eclipse was special because the total phase lasted more than four minutes at the center of the path. Most last only a minute or two. The next total solar eclipse is August 1, 2008. It will be seen in northern Canada, Greenland, Siberia, Mongolia and northern China. It will last about 2 minutes. The next total solar eclipse visible from the United States won't happen until August 21, 2017.

Schools, museums and the media worldwide witnessed the eclipse via NASA webcasts, podcasts and live video feeds as part of the Sun-Earth Day program.