Rocks in your Gas Tank: Experiments Onboard the International Space Station Could Accelerate the Drive Toward a Hydrogen-Based Economy. 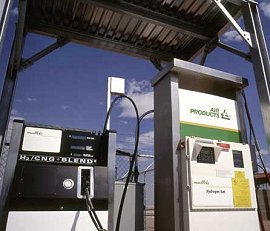 Imagine pulling up to a filling station, inserting the nozzle into the tank and the gas flowing into your tank is ... hydrogen. It's colorless, odorless and the byproduct of burning hydrogen is water vapor, quickly and safely absorbed by the environment. One pound of hydrogen supplies three times as much energy as a pound of gasoline. And it's the most plentiful element in the universe! No wonder scientists are trying to figure out how to make hydrogen work as a practical fuel.

"Dozens of companies, including all the major automobile manufacturers, have designed engines that burn hydrogen--they're a lot like the internal combustion engines we have in cars today," says Al Sacco, director of the NASA-supported Center for Advanced Microgravity Materials Processing (CAMMP) at Northeastern University in Boston. "Fuel cells--another possible source of power for cars -- use hydrogen, too. To make these technologies work in the real world, scientists must find a way to store and transport hydrogen safely at a cost comparable to that of gasoline."

It's not easy: Hydrogen gas is light and elusive. Tiny H2 molecules like to sneak through cracks and seals -- and once free they quickly disperse. Hydrogen diffuses four times faster than methane and ten times faster than gasoline vapors. This is great for safety because a leak is quickly diluted and rendered harmless. It's a headache for anyone who wants to store the gas.

Liquid hydrogen is more compact and easier to contain, but it can be troublesome, too. Hydrogen liquefies at a temperature of about 20oK (-253oC). Maintaining a tank full of liquefied hydrogen requires a heavy cryogenic support system, which may not be practical for passenger cars. Liquid hydrogen is actually cold enough to freeze air. This could cause plugged valves and unwanted pressure build-ups. Insulation to prevent such problems adds to the weight of the storage system.

How can we overcome these obstacles? Simple: put rocks in your gas tank.

Not ordinary rocks. Zeolites. Sacco explains: "Zeolites are porous, rocky substances that act like molecular sponges. In their crystalline form, zeolites are threaded by a network of interconnected tunnels and cages, similar to a honeycomb." A fuel tank lined with such crystals might be able to trap and store hydrogen gas "in a liquid-like state -- without heavy cryogenics." With support from NASA's Space Product Development program at the Marshall Space Flight Center, Sacco and colleagues at CAMMP are working to make zeolite gas tanks a reality.

Zeolite crystals form in a number of complex shapes that make them highly absorbent.

The name zeolite comes from the Greek words "zeo" (to boil) and "lithos" (stone), literally meaning "the rock that boils." This is because zeolites give up their contents when heated.

Sacco described how a temperature-controlled zeolite gas tank might work: "We would add some negatively-charged ions to the zeolite. These ions act like caps, just like caps on an ink bottle; they block the zeolite's crystalline pores. By heating the tank -- just a little -- we can make the ions move away from the pores. We fill the zeolite with hydrogen, drop the temperature back to normal, and the ions slide back in place, sealing off the exits."

Nearly 50 kinds of zeolites with different chemical compositions and crystal-structures are found in nature, and chemists have figured out how to synthesize many more. Anyone with a cat has seen some: they act as odor-absorbers in kitty litter. "The zeolites we have now can store quite a bit of hydrogen," notes Sacco. "But not enough." 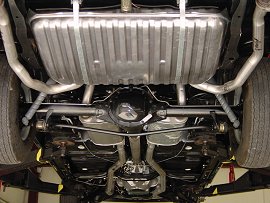 How much is enough?

Picture this: Your car's fuel tank is lined with crystallized, porous rock and that "rock" weighs 93 pounds. You pull into a hydrogen fueling station and the attendant forces 7 pounds of hydrogen into the zeolite-lined walls of the tank. This, theoretically, would be the hydrogen equivalent to a full tank of gasoline -- in both total weight and energy content.

The gas tank of a Chevy Camaro. Automakers would like hydrogen fuel tanks to be about the same size and weight--and hold the same amount of energy. Image credit and copyright: CamaroMuscle.com.

"If we can grow zeolite crystals that hold 6% to 7% of their own weight in hydrogen," says Sacco, "then a zeolite tankful of hydrogen would be competitive with an ordinary tankful of gasoline." The best existing zeolites can hold only 2% to 3%, however.

In 1995, Sacco traveled to space as a mission specialist onboard the space shuttle Columbia (STS-73). His purpose: to grow better zeolite crystals. "In low-gravity, materials come together more slowly, allowing zeolite crystals to form that are both larger and more orderly." Zeolite crystals produced on Earth are small, roughly 2 to 8 microns across. "That's about one-tenth the thickness of a human hair." The ones he grew on the space shuttle were not only 10 times bigger, but also better organized internally -- a promising start. 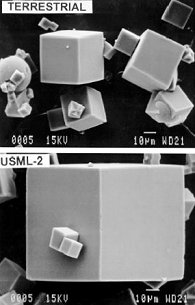 "The next step is the International Space Station," says Sacco. He and others at CAMMP have built a Zeolite Crystal Growth Furnace, which was installed on the ISS in early 2002. "Ken Bowersox, the ISS Expedition 6 commander, has used the furnace to grow some crystals for us. Ken had to correct some unexpected problems with the mixing of the crystal growth solution--this shows the values of humans in space -- but after that the experiment went smoothly."

"Now we need to get those crystals back to Earth where we can examine them. A few might come down in May," when the Expedition 6 crew leaves the ISS in an Soyuz capsule. "I'd really like to see them," says Sacco.

The goal, he says, is not to mass produce zeolite crystals in space. That's not economical--at least not yet. "We simply want to find out if it's possible to grow zeolite crystals that can reach the 7% threshold. If we can do that in space, we'll figure out how to reproduce the process on the ground."

Throughout his career, Sacco has envisioned a worldwide transition from fossil to hydrogen fuels. It's a big dream, but it could happen. "Zeolites may be the key to hydrogen fuel as a leapfrog technology."

Coming soon… a hydrogen fueling station near you?

Center for Advanced Microgravity Materials Processing -- CAMMP is one of 15 "Research Partnership Centers" around the country that are managed by NASA's Space Product Development program at the Marshall Space Flight Center.

Space Product Development -- (NASA/SPD) The goal of NASA's Space Product Development (SPD) program is to help American businesses explore the potential--and reap the rewards--of doing business in space. Doing this helps bring the benefits of space down to Earth where it can, and does, enrich the everyday lives of the American public. "Industry investment in space is high," says Mark Nall, manager of NASA's SPD program at Marshall Space Flight Center. "We assist companies developing experiments and help them explore how space research can contribute to the growth of their businesses." 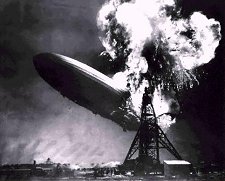 Hydrogen Safety -- (hydrogennow.org) a fascinating discussion of the Hindenburg disaster and hydrogen's mythical role in it. See also "Is Hydrogen Dangerous?" from the Rocky Mountain Institute.

Zeolites aren't just absorbers, they are also wonderful filters. They can be found in many water and air purifiers, and they're widely used by the petroleum industry to extract gasoline from petroleum. "All of the gasoline in the world is derived from petroleum using zeolite," says Sacco. Zeolites are also critical to the manufacture of perfumes and paints. The production of zeolite for these many applications is a 2 billion dollar per year industry.

Cool Fuel Cells -- (Science@NASA) Fuel cells promise to be the environmentally-friendly power source of the future, but some types run too hot to be practical. NASA-funded research may have a solution.

How much does a gallon of gas weigh? Click here for the answer.