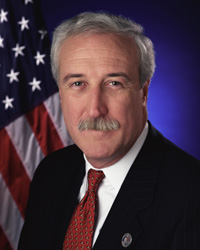 Thirty-five years ago on July 20, 1969, people throughout the world looked up at the moon with awe and wonder, knowing for the first time in history that brave explorers had set foot on an extraterrestrial body.

The Apollo 11 mission marked the successful accomplishment of a bold national goal by NASA's first generation of explorers. NASA is commemorating the epic voyage of Apollo 11 this week with special programming on NASA TV and on our Web site, http://www.nasa.gov, and this evening with a Smithsonian National Air & Space Museum reception featuring Apollo 11 crew members Neil Armstrong, Michael Collins and Buzz Aldrin, as well as other astronaut heroes from the Mercury, Gemini and Apollo programs. We owe so much to these pioneering explorers and to the dedicated NASA and contractor employees who made their journeys possible.

During this evening's tribute, we will have occasion to honor the Mercury, Gemini and Apollo astronauts and surviving spouses in attendance by designating them, as well as America's long-time honorary astronaut, Walter Cronkite, as NASA's "Ambassadors of Exploration." Each will be presented a sample from the 842 pounds of moon rocks and soil returned during the six lunar expeditions from 1969 to 1972. In turn, our new Ambassadors of Exploration will present these priceless samples on loan from NASA to a museum or school of their choice. The samples will be prominently displayed in order to inspire dreams of space travel in a new generation of explorers.

July 20 is also a red-letter date in the history of robotic exploration. On this day in 1976, shortly after our nation's bicentennial, the Viking 1 spacecraft landed on the surface of Mars and began in earnest the search for life beyond Earth. We are equally indebted to the architects of our planetary exploration program for ensuring that the science conducted by NASA is always daring.

As proud as we are of our storied past, we are even more excited about the exploration opportunities of the present and future. A promising new century of exploration and discovery is underway, with our sights now set on sending a combination of human pioneers and robotic explorers throughout the solar system. Our aim, just as with Project Apollo, is to go in peace for all mankind, seeking to answer profound questions and to develop breakthrough technologies that will improve life here on Earth. As this incredible journey unfolds, I am very proud that NASA will be leading the way. The Eagle has landed. The Eagle is taking flight.