Quick quiz: what leaks more oil into the world's oceans each year - big oil tanker spills or individual vehicle owners changing their own engine oil? If you said big tanker spill, think again. Nearly nine times the amount of oil spilled from tankers and other transport vessels gets leaked into Earth's seas by do-it-yourself oil changes and other oil use.

About half of all oil that enters Earth's oceans comes from human activity - from mining, transporting, and using petroleum products. Overwhelmingly, the largest runoff of human-generated (anthropogenic) oil into oceans comes from the consumption of petroleum. Nearly 70 percent of global oil release from human sources and 85 percent of North American release arises from oil use, such as from car engines. That's about 140 million gallons of oil worldwide each year. Only about nine percent of human-related release results from transportation activities, including tanker spills. 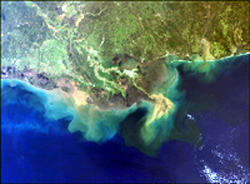 The EPA estimated in 1989 that half of U.S. car owners change their own oil, but only a third of these properly dispose of the used oil. At an average of 5 quarts per change, that quickly adds up, as the National Research Council estimates that even five quarts can contaminate millions of gallons of water.

Natural seepage from the rocks beneath the sea floor accounts for the other half of oil entry into oceans, that which doesn't result from human activity. Natural seepage occurs over widespread areas of the sea floor, but oil from human sources concentrates at mouths of rivers where they empty into the ocean, threatening sensitive coastal areas. The anthropogenic oil doesn't originate at a single area, but rather washes from roads, parking lots, and driveways into storm and waste sewers and rivers that feed our oceans.

Over time, animals and plants adapted to the slow natural seepage, but the human activity-related drainage remains a problem. Every year, oily road runoff from a city of 5 million could contain as much oil as one large tanker spill. Two-stroke engines, found in pleasure boats, jet skis, and chainsaws, also provide a large source of oil pollution: each cycle of the engine leaks a little oil out of the combustion chamber. Exhaust from all types of engines contains particles of oil that settle and eventually find its way into the waterways.

NASA satellite instruments such as the Sea-viewing Wide Field-of-View Sensor (SeaWiFS) on the Orbview-2 spacecraft, the Moderate resolution Imaging Spectroradiometer on the Terra and Aqua satellites, the Topex/Poseidon mission study the oceans from space. Their combined observations help monitor the health of the Earth's seas and establish baseline data against which scientists can compare new observations.