Taking the family car out for a spin has assumed a whole new meaning at NASA's Goddard Space Flight Center, where engineers used a giant centrifuge to test the limits of ordinary pickups and SUVs in terms of risk for rollovers. 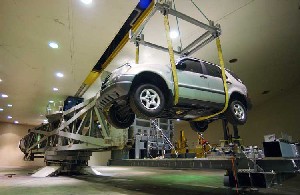 NASA takes vehicle out for a spin

You may have used a centrifuge in your chemistry class to separate chemicals of different densities. A centrifuge is a machine that rapidly spins whatever is inside. Now imagine a centrifuge that can reach speeds of more than 200 miles per hour and that's 150 feet in diameter and you've got a picture of NASA's one-of-a-kind High Capacity Centrifuge (HCC).

Usually NASA uses the HCC to spin satellites and other spacecraft, making sure that they will be able to withstand the harsh conditions of blastoff so they can continue safely on their journey into space. But recently in a joint effort with the National Highway Traffic Safety Administration (NHTSA), NASA has been spinning trucks and SUVs on the centrifuge to test their safety.

"We can control the centrifuge within a hundredth of an RPM (revolutions per minute)," said Carmine Mattiello, section head of NASA's structural dynamics lab at GSFC. "We can tell exactly when the wheels are coming off the ground."

A crash test dummy also went along for the ride in each vehicle. Sitting in the driver's seat, the "passenger" was an important part of the physical test environment. The dummy, similar in shape and weight of a person, increased the realism and accuracy of the test results.

Determining the amount of force that can cause an SUV to tip requires some knowledge of three concepts: inertia, centripedal force and something called the center of gravity

Inertia is based on the idea that an object at rest tends to stay at rest and an object in motion tends to stay in motion unless acted on by an outside force. Inertia is actually a lot like the way you feel on a Saturday morning. If you're sleeping (an object at rest), you don't want to wake up and will probably keep sleeping until someone or something makes you get out of bed (an outside force). But if you're playing in a soccer game (an object in motion), you tend to keep playing and will only stop if the ref blows the whistle (an outside force).

Without an outside force an object is in motion will just continue forward in a straight path at a constant speed. But when a vehicle is put in the centrifuge, a different force disrupts inertia. This is called centripedal force and it causes the object to take a circular path, forcing it to move in towards the center of the circle.

Click image for animation demonstrating why cars roll over. - 2.5 MB

But disrupting the inertia isn’t enough to tip an SUV. The vehicle will tip because of the combination of the centripedal force and because it has a high center of gravity. The specific details of this combination were the experimental goals for the researchers.

The center of gravity has to do with the distribution of an object's mass. If the greatest amount of mass is focused in a spot that’s far from the ground, as is the case with an SUV, it would be pretty easy to tip over on a sharp turn. Compare this to a drag racer with two small wheels extended far out front and two big wheels in the back. The mass is distributed more evenly and close to the ground so a sharp turn isn’t as likely to flip the vehicle over.

The information about an SUV's center of gravity and the force it takes to tip it will help researchers answer questions like: "What happens when a driver makes a sudden sharp turn in an emergency? What happens to a vehicle on a curving road?" And just as NASA uses the centrifuge to make sure that spacecraft will be safe on their journeys, the NHTSA will take the data and decide what needs to be done to make the vehicles safer for you and your family on your journeys.