Satellites Watch the World's Cities Grow
While some people move to cities because they love the bright lights and cosmopolitan lifestyle, others are simply looking for work, with hopes of a better life. For these reasons and more, half the world's people currently live in urban areas, and by 2025, the United Nations projects that 60 percent of the world's people will live in city areas. 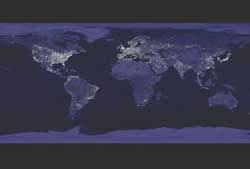 With so many people living and moving to metropolitan areas, the scientific world recognizes the need to study and understand the impacts of urban growth both locally and globally. While scientists have improved their understanding of local impacts of urbanization, including air pollution, urban heat islands, vegetation changes, and modified rainfall patterns, little is known about the cumulative impacts of cities on larger regional and global climates. In order to create global climate models that include the effects of city landscapes, scientists need current assessments that locate and monitor urban areas globally.

To help answer some of these questions, Boston University researchers used two satellites combined with population data to provide an up-to-date assessment of urbanized land across the planet. This is important because until now, climate modelers and others have relied on outdated digital data of urban areas dating back to the 1960s.

In a second phase of this two part study, the researchers used NASA's Landsat satellite to measure and analyze urban growth among a global cross-section of 30 mid-sized cities during the 1990s, according to the presentation of findings at the 2003 Fall American Geophysical Union Meeting in San Francisco.

Preliminary results from Boston University research assistant and lead author of the NASA-funded study, Annemarie Schneider, show that some cities in the sample, including Atlanta, Georgia, Calgary, Canada, and Curitiba, Brazil, grew in area by as much as 25 percent from 1990 to 2000. More importantly, this kind of global satellite-derived analysis allows researchers to compare areas and determine spatial trends in how cities have developed.

"Cities such as Johannesburg and Shanghai have grown extensively, and we need maps that reflect this," Schneider said. "These maps will not only be useful to scientists studying energy transfer, hydrology and climate interactions, but to social scientists trying to understand the land impacts of population and economic activity at a global scale." 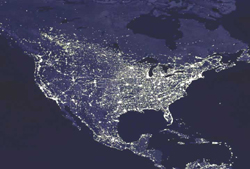 United States at Night. Courtesy: DMSP and NASA.
Click image to see larger picture.
Each data source has its advantages and disadvantages. For example, the MODIS imagery provides coarse 1 kilometer (0.6 miles) resolution data of the Earth, but has trouble distinguishing between urban areas and barren landscapes. Meanwhile, the DMSP nighttime lights data capture lit areas globally, but distributions of light do not represent built environments or patterns of settlement. Schneider compensated for inadequacies in each data source by fusing information from all three.

Schneider's study provides a current global record of urbanization, including growth in places like Africa that haven't been mapped for many years. This is the first time MODIS data has been used to assess cities globally. An article describing Schneider's technique for mapping urban areas appears in the December issue of Photogrammetric Engineering and Remote Sensing. 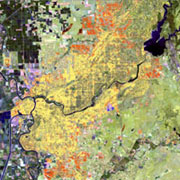 When the cities were compared, three common spatial patterns became clear. First, land developments have formed in clusters outside the city. While fairly common in the U.S., Schneider noticed this trend in large cities of China and India as well. Second, there are a number of cities where growth has occurred along roads leading out of the city. This trend poses challenges both to city managers and governments who must provide water, sewage, adequate housing, schools and health care services to dispersed people, and to the citizens, who face increasingly difficult commutes. Finally, Schneider found scattered, patchy development around cities, with less structure than the first two trends. This is the first time actual data have been used to confirm theories made by urban researchers during the last century.

The mission of NASA's Earth Science Enterprise is to develop a scientific understanding of the Earth System and its response to natural or human-induced changes to enable improved prediction capability for climate, weather, and natural hazards.