Wetland Changes Affect South Florida Freezes
Orange and other citrus crops are being squeezed by stronger freezes in South Florida, due to changes in wetlands. 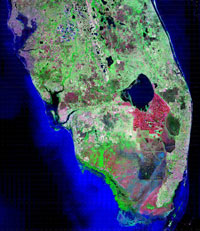 Image to right: Landsat Satellite Looks at Florida -- This image mosaic of South Florida was acquired by the Landsat-5 satellite during the late-1980's. The large blue circular area left of the center is Lake Okeechobee. The dark colored area just to the south of the lake is an agricultural area. To the southeast and east are water conservation areas. The Everglades wetlands are to the south. Click on image to enlarge. Credit: EarthSatellite Corporation/NASA/USGS

Scientists using satellite data, records of land-cover changes, computer models, and weather records found a link between the loss of wetlands and more severe freezes in some agricultural areas of south Florida. In other areas of the state, land use changes resulted in slightly warmer conditions. 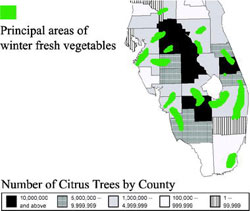 Image to left: Citrus Crops in Florida -- The number of citrus trees by county, and key areas of winter vegetable cultivation during 2000. Click on image to enlarge. Credit: FDACS (2002)/Colorado State Univ.

They found a strong connection between areas that were changed from wetlands to agriculture during the 20th century, and those that experienced colder minimum and subfreezing temperatures over a longer time, in the current land-use scenario. Water typically doesn't cool as quickly as the land at night, which may explain why when wetlands are converted to croplands the area freezes more quickly and more severely. 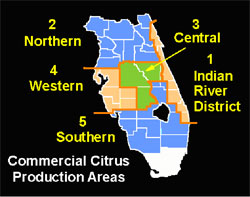 "The conversion of the wetlands to agriculture itself could have resulted in or enhanced the severity of recent freezes in some of the agricultural lands of south Florida," said Curtis Marshall.

The study focused on "radiation freeze events" which occur at night, frequently under calm wind conditions and when there is little or no cloud cover. At night, much of the warmth absorbed by the land during the day escapes into the atmosphere, cooling the ground.

This study of wetland changes is important to Florida and the rest of the U.S. Particularly Florida because it ranked first among states in 2002 for cash receipts of citrus crops. The state was either first or second for several fresh fruit and vegetable crops, including avocados, bell peppers, strawberries, sweet corn, tomatoes, watermelon. 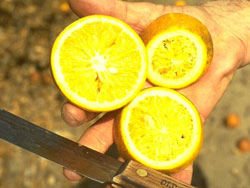 Image to left: Evaluating Freeze Damage -- To evaluate fruit for freeze damage several cuts are made. The first cut removes the cap or rind at the stem end. The second cut is made 1/4" down from the beginning of the pulp. The third cut is 1/4" inch further down. The fourth and final cut is made through the center. This orange has wavy and open segments indicating burst juice cells. The effects of drying are seen at each cut. Click on image to enlarge. Credit: USDA

Over the last 150 years, the citrus industry has been planting and moving further southward, changing more wetlands into agricultural lands. Ironically, as the industry moves further south to avoid freezes, the land changes create the conditions the industry is trying to avoid.

The scientists analyzed land-cover changes over the past 100 years in Florida based on information from the USGS, which reconstructed what the vegetation looked like before 1900. They also used early 1990s Landsat-5 satellite images or land-cover. They input land-cover and weather record data into a computer model and re-created the conditions for the three freezes. 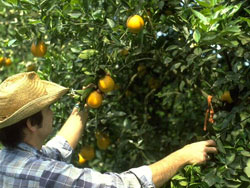 Image to right: Checking for Freeze Damage -- Weather conditions may affect the fruit droppage rates. Of all the varieties, the honey tangerines have had the highest droppage rates. Click image to enlarge. Credit: USDA

In all three cases, the most densely cultivated areas were colder and also experienced subfreezing conditions for a longer period of time. Those areas include south and southwest of Lake Okeechobee and other key agricultural areas in the Kissimmee River valley.

They concluded that the conversion of wetlands may be enough to make the freeze events stronger in south Florida. Meanwhile, the researchers also found that an open-pit mine surrounded by urban areas east of Tampa exhibited warming. Warmer areas were also seen over coastal areas of west-central and east-central Florida.