NASA and the National Oceanic and Atmospheric Administration (NOAA) today outlined research that has helped to improve the accuracy of medium-range weather forecasts in the Northern Hemisphere. 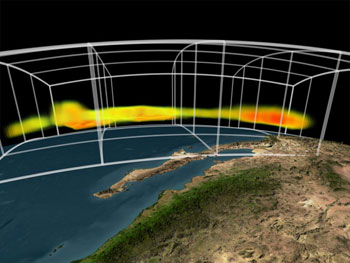 Image to right: Clouds are peeled back to show 3D AIRS data of a storm's water vapor content. The image then melts away to reveal the heart of the storm. Click on image to enlarge Credit: NASA

NASA and NOAA scientists at the Joint Center for Satellite Data Assimilation (JCSDA) in Camp Springs, Md., came up with procedures to improve forecasting accuracy. The scientists worked with experimental data from the Atmospheric Infrared Sounder (AIRS) instrument on NASA's Aqua satellite. 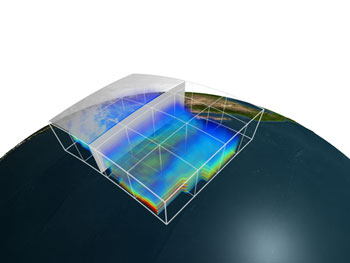 Image to left: Clouds are peeled back to show 3D AIRS data of a storm's water vapor content. The image then melts away to reveal the heart of the storm. Click on image to enlarge Credit: NASA

"This AIRS instrument has provided the most significant increase in forecast improvement in this time range of any other single instrument,” said retired Navy Vice Adm. Conrad C. Lautenbacher, Jr., Ph.D., under secretary of commerce for oceans and atmosphere and NOAA administrator. 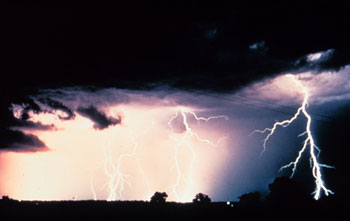 Image to right: This thunderstorm at night has cloud-to-cloud and cloud-to-ground lightning strikes. It was taken using time-lapse photography. Click on image to enlarge. Credit: NOAA Photo Library

"Climate and weather forecasts are dependent upon our understanding current global ocean and atmosphere conditions. If we want to be able to predict what the weather will be like in the future, we must adequately define the global conditions today. Satellite data, like AIRS provides, is a vital link for NOAA to take the pulse of the planet continuously," added Lautenbacher.

"A four-percent increase in forecast accuracy at five or six days normally takes several years to achieve," said JSCDA Director, Dr. John LeMarshall. "This is a major advancement, and it is only the start of what we may see as much more data from this instrument is incorporated into operational forecast models at the NOAA's Environmental Modeling Center."

The European Center for Medium Range Weather Forecasts began incorporating data from AIRS into their operational forecasts in October 2003. The center reported an improvement in forecast accuracy of eight hours in Southern Hemisphere five-day forecasts.

AIRS is the result of more than 30 years of atmospheric research and is led by Dr. Moustafa Chahine of NASA’s Jet Propulsion Laboratory, Pasadena, Calif. AIRS is the first in a series of advanced infrared sounders that will provide accurate, detailed atmospheric temperature and moisture observations for weather and climate applications.

The JCSDA is operated by NOAA, NASA, the U.S. Air Force and Navy. The goals of the center are to accelerate the use of observations from Earth-orbiting satellites to improve weather and climate forecasts, and to increase the accuracy of climate data sets.


For information about AIRS on the Internet, visit: