NASA Study Finds Warmer Future Could Bring Droughts
NASA scientists may have discovered how a warmer climate in the future could increase droughts in certain parts of the world, including the southwest United States. 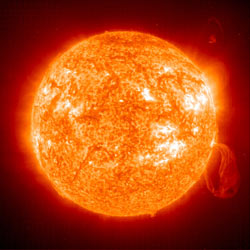 Image right: Fluctuations in the sun's output have been linked to changes in the historical climate, and they provide clues as to how global warming could produce droughts in the future. This image of the sun was taken by NASA's Solar and Heliospheric Observatory in 2001. Credit: NASA/GSFC

The researchers compared historical records of the climate impact of changes in the sun's output with model projections of how a warmer climate driven by greenhouse gases would change rainfall patterns. They found that a warmer future climate likely will produce droughts in the same areas as those observed in ancient times, but potentially with greater severity.

"These findings strongly suggest that greenhouse gases and long-term changes in solar activity both can have major influences on climate via similar processes," said Drew Shindell, NASA Goddard Institute for Space Studies, New York. Shindell is lead author of a paper that appeared in the Dec. 27, 2006, issue of the American Geophysical Union's Geophysical Research Letters.

"There is some evidence that rainfall patterns already may be changing," Shindell added. "Much of the Mediterranean area, North Africa and the Middle East rapidly are becoming drier. If the trend continues as expected, the consequences may be severe in only a couple of decades. These changes could pose significant water resource challenges to large segments of the population."

Using the NASA Goddard Institute for Space Studies climate model, researchers found that changes in solar output in the ancient past increased surface warming and altered atmospheric moisture and circulations. These changes likely led to the severe droughts seen in paleoclimate records. 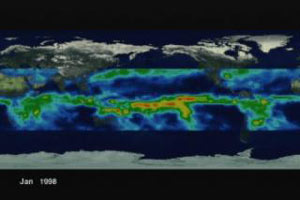 Image left: Typically arid regions of the world, such as the U.S. Southwest, may become even drier in the future, according to new results from NASA climate models. This animation shows observations of average rainfall from 1998 through 2000 from the Tropical Rainfall Measuring Mission satellite. Red and yellow indicate areas of high rainfall. Blue and green depict areas of low rainfall. Click image to view animation -- no audio Credit: TRMM/NASA/JAXA

The same model showed that greenhouse-gas warming has similar effects on the atmosphere, suggesting drier conditions may become more common in the subtropics. Rainfall could decrease further in already water-stressed regions such as the southwest United States, Mexico, parts of North Africa, the Middle East, and Australia. Meanwhile, precipitation may increase across the western Pacific, along much of the equator and in parts of southeast Asia.

The computer model considers changes in the oceans, weather, and chemistry of the atmosphere, like ozone concentrations, and accurately reproduced the broad rainfall shifts toward regionally drier or wetter conditions during the past several hundred years. Sunspot and ice core data also link the historical rainfall shifts to variations in the amount of energy released by the sun. Since the size of solar changes is uncertain, the study focused on the location and pattern of precipitation shifts, not their precise amount.

Increases in solar output break up oxygen molecules, raising ozone concentrations in the upper atmosphere. This adds to upper atmospheric heating that leads to shifts in circulations down to the surface. In turn, surface temperatures warm, and the Earth's basic rainfall patterns are enhanced. For instance, in wet regions such as the tropics, precipitation usually increases, while dry areas become more prone to drought since rainfall decreases and warmer temperatures help remove the small amount of moisture in the soil.

"Precipitation is hard to predict because it is so highly variable, but these results increase our confidence that continued warming will be associated with large-scale changes in rainfall," said Shindell.

Researchers also considered numerous tree-ring, fire, and lake sediment records from across the Americas, including Mexico, Peru, and the Yucatan Peninsula. These data are reliable indicators of historical climate and confirm a pronounced increase in drought frequency in the southern United States, Mexico, and other subtropical locations during periods of increased solar output in the past 1,200 years. This long-term record of solar output is based on chemical isotopes whose production is related to the sun's brightness. Conversely, in parts of the tropics, ocean sediment data, key indicators of precipitation changes, reflect increased rainfall.

According to the researchers, the same processes identified by this new research very likely also affected past civilizations, such as the Pueblo people of New Mexico and Arizona who abandoned cities in the 1300s.