Volcanic Blast Location Influences Climate Reaction
When you think of volcanoes, you do not usually think of them cooling weather in parts of the world, but that is just what happened when Mount Pinatubo in the Philippines (islands) exploded in 1991. Temperatures around the world cooled by 1-2 degrees Fahrenheit up to two years following the eruption. 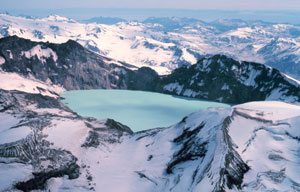 Image to right: The caldera, or crater created by the collapse of Mount Katmai in 1912, now containing both a lake and a glacier, as seen in September 1980. Credit: NOAA Corps

Now, a recent study that looks at volcanoes exploding around the world, has determined that eruptions far north of the equator affect the world's climate differently than volcanoes in the tropics.

The research, funded by NASA and the National Science Foundation focused on the eruption of Mount Katmai, Alaska, on June 6, 1912. That eruption caused cooling in the Northern Hemisphere (north of the equator) during the summer. It also weakened the Asian monsoon, warmed India, and cooled Asia the following winter. In addition, across northern India west into the Persian Gulf, there was less cloud cover, warmer temperatures and less precipitation.

"Studying such events will help us be better prepared for the next major eruption while giving scientists clues on the type of climate shifts and changes to expect," said Luke Oman, a researcher at Rutgers University's Department of Environmental Sciences, New Brunswick, N.J., and lead author of the study that appeared in the July 2005 issue of the Journal of Geophysical Research-Atmospheres. 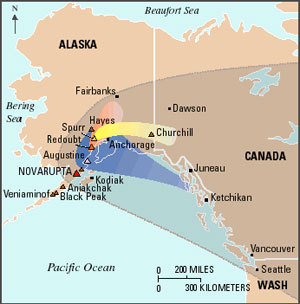 Image to left: Volcanic ash from Mount Katmai, more than from all other historical eruptions in Alaska combined, devastated areas hundreds of miles away, as shown in this map. Credit: USGS

Volcanoes affect global climate by spewing tons of sulfur dioxide gas into the atmosphere. That gas turns into sulfate aerosols, or tiny particles of dust and other matter that can stay in the atmosphere for years, influencing short-term weather and global climate.

By using one of the most modern General Circulation computer climate Models (GCMs) at NASA's Goddard Institute for Space Studies (GISS), New York, N.Y., the researchers studied the Mount Katmai volcanic eruption. They made a computer simulation of Katmai's eruption and an eruption three times as large to study their climate impacts.

Unlike earlier studies on volcanic eruptions in the tropics, this research did not show a change in an important climate pattern called the "Arctic Oscillation" (AO) following the Mount Katmai eruption. 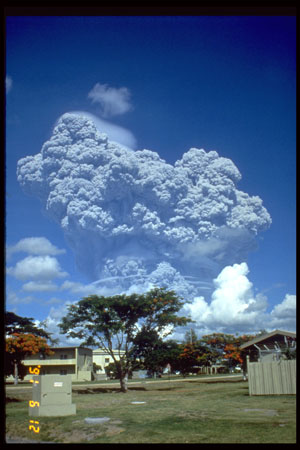 Image to right: The June 12, 1991 eruption of Mount Pinatubo, taken from the east side of Clark Air Base. + Click for high resolution image. Credit: USGS

AO is a climate pattern defined by winds circulating counterclockwise around the Arctic at about 55 degrees north latitude (about even with Moscow). The air can spin more slowly and spill cold air down toward the equator into the mid-latitudes, or it can spin faster and keep the cold up north.

Tropical eruptions like Mount Pinatubo usually create aerosols that spread around the globe and block heat from the sun in the lower atmosphere, or troposphere, cooling temperatures in areas close to the tropics. This reduces the north to south temperature difference that helps to shift the AO, keeping frigid air in the north during the winter, resulting in mild conditions over much of eastern North America.

But, when Mount Katmai erupted in Alaska, most of the aerosols remained well to the north, where they were not heated as much. In turn, the lower stratosphere did not warm greatly, so there was little influence on the AO.

"This study not only offers further evidence that the location and intensity of an eruption largely determine the Earth's overall climatic response, it also helps us see how well our computer models perform," said co-author Gavin Schmidt of NASA GISS.

Future research promises to further improve the understanding of large volcanic eruptions on the Earth's climate, helping us lessen eruption effects on people and natural resources.