Satellites and the City: NASA Scientists Encourage Satellite Observations to Improve Our Understanding of Urban Effects on Climate and Weather
As millions of the nation's city dwellers descend from high-rise apartment buildings to hail cabs or use local transit systems to dine at trendy restaurants, attend art exhibits, commute to and from work, or to head uptown to catch a championship ball game, many are unaware of the possible impact of urbanization on climate and weather. 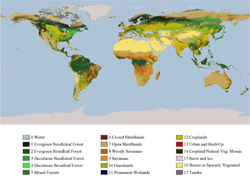 Image to right: This image shows land cover through a color-coded classification. There are 17 types of land cover, ranging from evergreen needleleaf forest to tundra. Water is depicted in light blue. Credit: NASA GSFC

“More and more people live in cities. This means that cities will grow rapidly over the next several decades. Evidence continues to mount that cities affect the climate,” said J. Marshall Shepherd, co-author of a paper that appeared in the May 2005 issue of AMS Bulletin, and Deputy Project Scientist of the Global Precipitation Measurement Mission at NASA’s Goddard Space Flight Center, Greenbelt, Md. “Yet current climate models don’t represent urban areas very well. Our research suggests that, using satellite data and enhanced models, we will be able to answer several critical questions about how urbanization may impact climate change 10, 25 or even 100 years from now.”

Shepherd and co-author Menglin Jin, a visiting scientist at NASA, and research scientist at the University of Maryland-College Park, suggest that satellite-observed urban information is extremely useful for advancing our ability to simulate urban effects in climate models. They go on further to propose that satellite data is the only feasible way to represent the expanse of global urban surfaces and related changes to the Earth’s surface, vegetation, and aerosols.

Urbanization is the process by which an increasing proportion of the nation’s population resides in cities and the metropolitan areas surrounding cities, and is an example of human-induced land cover change. According to the United Nations Population Division, urban regions only cover 0.2 percent of Earth’s land surface, but contain nearly half of the world’s population. However, to date, global climate models (GCMs) and regional climate models (RCMs) do not reflect urban landscapes, according to the paper’s authors. 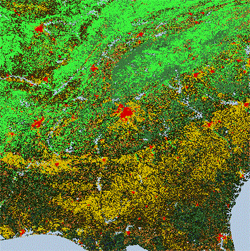 Image to left: This image is a Moderate Resolution Imaging Spectroradiometer (MODIS)-captured land cover image of the southeastern U.S. (near Atlanta). The red color specifies “Urban and Built-up” as indicated from the color-coded classification system in the land cover classification world map. Credit: NASA GSFC

GCMs and RCMs are models, or complex mathematical computer simulations of the atmosphere and the oceans, and are the primary tool for predicting the response of the climate to increases in carbon dioxide and other greenhouse gases.

What is it about urban areas like New York City, Paris, Tokyo or Sydney that the paper’s authors believe would lend value to climate models, and subsequently, to climate predictions? According to scientific studies presented at a recent American Geophysical Union session organized by the authors, “the construction of buildings, parking lots, houses, urban areas dramatically change the smoothness of a surface, thermal conductivity (the ability of a material to transmit heat), hydraulic conductivity (measure of the ability of soil to transmit water), albedo (reflectivity off of Earth’s surfaces), emissivity (the ratio of radiation emitted by a body or surface) and vegetation cover.” As such, urban landscapes change the typical physical processes of land surfaces, and importantly, also add new and unique characteristics to land surfaces and atmosphere.

Also, structures like Trump Tower, for instance, a world famous building in the heart of the Big Apple, can change the basic wind flow in and around cities that can alter air quality, temperature, cloud distribution, and precipitation patterns. It is increasingly evident that such atmospheric changes near cities can be captured by NASA satellites such as Aqua, Landsat, Terra, and the Tropical Rainfall Measurement Mission (TRMM).

“It’s important for everyone to know that urbanization affects things we all care about like the amount and frequency of rainfall or how hot or cold the outdoor temperature may be,” said Jin.

The paper’s authors believe that the story of satellites and the city deserves further review, and can be of great value to our understanding of how our global inclination to be urban dwellers can also change the climate of our home planet.