NASA Probes the Sources of the World's Tiny Pollutants
Pinpointing pollutant sources is an important part of the ongoing battle to improve air quality and to understand its impact on climate. Scientists using NASA data recently tracked the path and distribution of aerosols -- tiny particles suspended in the air -- to link their region of origin and source type with their tendencies to warm or cool the atmosphere. 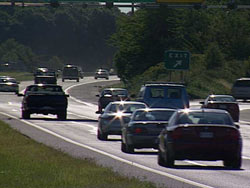 By altering the amount of solar energy that reaches the Earth's surface, aerosols influence both regional and global climate, but their impact is difficult to measure because most only stay airborne for about a week, while greenhouse gases can persist in the atmosphere for decades. In a new study researchers investigated the sources of aerosols and how different types of aerosols influence climate. 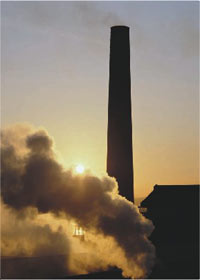 Using a GISS computer model that includes a variety of data gathered by NASA and other U.S. satellites, the researchers simulated realistic aerosol concentrations of important aerosol types in the atmosphere and studied the amount of light and heat they absorb and reflect over several regions around the globe.

Each area has a unique mix of natural and pollutant aerosol sources that produces different types of aerosols and causes complex climate effects. The industry and power sectors are particularly important in North America and Europe and produce large amounts of sulfur dioxide, while Asia has higher emissions from residential sources, which produce relatively more carbon-containing aerosols. 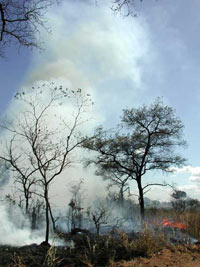 Image right: Outdoor biomass burning, including forest fires and the burning of fields in the tropics, is a major aerosol source. Credit: NASA

"Computer model simulations showed that black carbon in the Arctic, a potentially important driver in climate change, derives its largest portion from Southeast Asian residential sources," said Koch. "According to current model estimates, the residential sector appears to have a substantial potential to cause climate warming and, therefore, could potentially be targeted to counter the effects of global warming."

Black carbon absorbs sunlight, warming the atmosphere just as dark pavement absorbs more sunlight and becomes hotter than light pavement. It has a large influence on global climate because winds transport approximately half of the black carbon aerosols produced in important aerosol source regions like Asia and South Africa to other parts of the world. When lofted above precipitating clouds, these aerosols can remain airborne for relatively longer periods. Some of these aerosols are carried to polar regions where they settle on the surface of ice or snow, and absorb sunlight and boost melting. 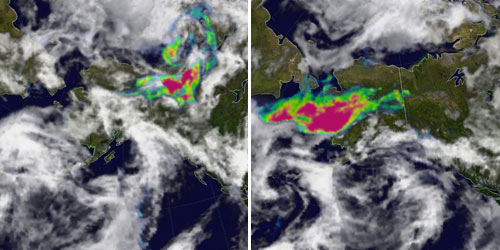 Images above: This pair of images from the Ozone Monitoring Instrument (OMI) on NASA’s Aura satellite shows smoke measurements over Alaska and western Canada on August 15, 2005 (top) and August 21, 2005 (bottom). Increasing amounts of smoke are shown as an aerosol index with shades of blue (little or no smoke) to dull red (thick smoke). Credit: NASA/OMI Science Team

Most particles, especially sulfates produced from the sulfur dioxide emissions of factories and power plants, are light-colored and tend to cool the atmosphere by reflecting sunlight or making clouds more reflective. Computer model simulations suggest this effect is especially heightened over parts of the Northern Hemisphere, including the central United States. The study found, however, that sulfur dioxide emissions in Southeast Asia and Europe have a smaller impact on climate because atmospheric conditions in those areas are not as efficient at turning the emissions into sulfate particles.

"This research is only the first step in considering the impacts of aerosols from different sectors on climate," said Koch. "Aerosols have other effects, like altering cloud characteristics that influence precipitation and climate."