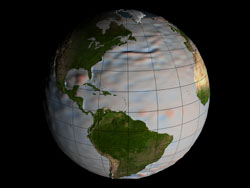 For the first time, researchers have the tools and expertise to understand the rate at which sea level is changing and the mechanisms that drive that change.

Image Left:Oceans change. Beyond merely the sloshing of waves that we all recognize along the beaches of the world, sea level describes a complex array of conditions, from chemistry to temperature to changes in the shape of the basins that hold the world's water. In this visualization, we look at changes in sea level measured from space using data from the TOPEX/Poseidon and Jason satellites. Click here to view this .mpg animation. Click on the image to open a high resolution image. Credit: NASA

Sea levels rise and fall as oceans warm and cool and as ice on land grows and shrinks. Other factors that contribute to sea level change are the amount of water stored in lakes and reservoirs and the rising and falling of land in coastal regions.

"From the Mississippi Delta to the Maldives Islands off the coast of India to the multitude of other low-lying coastal areas around the world, it’s estimated that over 100 million lives are potentially impacted by a three-foot increase in sea level," said Dr. Waleed Abdalati, head of the Cryospheric Sciences Branch at NASA’s Goddard Space Flight Center, Greenbelt, Md. "This is an ideal time, during the midst of an historic year of both related natural events and research developments tied to this critical global issue, to talk to the public about whether ice in our polar regions is truly melting, whether our oceans are indeed rising faster, and what these changes may mean to us." 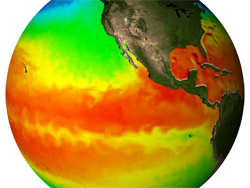 Image Right:Sea surface temperature plays a vital role in the behavior of the Earth's climate and weather. It is both a causal factor and a resulting effect of complex interactions of natural forces on Earth. NASA not only measures sea surface temperature from space using powerful scientific instruments, but it also studies temperature processes in advanced computer models, as shown in this animation. Click here to view this .mpg animation. Click on the image to open a high resolution image. Credit: NASA

NASA is taking advantage of its unique space-based satellite observations of Earth’s oceans and atmosphere, in combination with satellite observations and sea surface measurements from domestic and international partners, to learn more about why and how the world’s waters are rising. In doing so, the agency is hoping to determine more about factors leading to sea level change, indicators of change such as ocean expansion, changes in ice, impoundment of water, and movement of Earth and coastal regions, and how the latest research developments contribute to our knowledge of sea level rise.

NASA is working with NOAA, the National Science Foundation, and others to explore and understand sea level change -- to tell the story of what is happening. NASA focuses on developing ways to look at sea level change using data from NASA satellites and aircraft instruments, as well as ground and air observations and ocean measurements from partners. 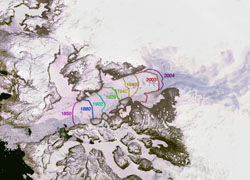 Image Left: Since measurements of Jakobshavn Isbrae were first taken in 1850, the glacier has gradually receded, finally coming to rest at a certain point for the past 5 decades. However, from 1997 to 2003, the glacier has begun to recede again, this time almost doubling in speed. Click here to view this .mpg animation. Click on the image to open a high resolution image. Credit: NASA

NASA satellite missions devoted to sea level research include: the Gravity Recovery And Climate Experiment (GRACE), which maps Earth’s gravitational field with precision and resolution, and whose data helps us better understand movement of water throughout the Earth; the Ocean TOPography EXperiment (TOPEX/Poseidon), a joint U.S./French satellite that uses radar to map the precise features of the oceans’ surface; Jason, which measures ocean height and monitors ocean circulation; and the Ice, Cloud and Land Elevation Satellite (ICESat), whose primary purpose is to study the mass of polar ice sheets and their contributions to global sea level change.

According to Dr. Laury Miller, Chief of the NOAA Laboratory for Satellite Altimetry in Washington, the big news that has emerged over the past few years is that the rate of 20th Century sea level rise is about two millimeters per year and that only a quarter of this is due to expansion caused by warming of the oceans. This provides an important context for these recent observations.

“We’ve found that the largest likely factor for sea level rise is changes in the amount of ice that covers Earth. Three-fourths of the planet’s freshwater is stored in glaciers and ice sheets, or about 220 feet of sea level," said Dr. Eric Rignot, Principal Scientist for the Radar Science and Engineering Section at NASA’s Jet Propulsion Laboratory in Pasadena, Calif. Research results by Rignot and partners, published in an October 2004 article in Science Magazine, further offer evidence that ice cover is shrinking much faster than thought, with over half of recent sea level rise due to the melting of ice from Greenland, West Antarctica’s Amundsen Sea, and mountain glaciers. 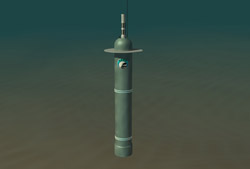 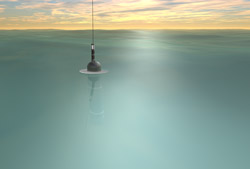 Images Above: While space based measurements are the only way to accurately measure global ocean conditions, complimentary measurements can be taken from floats distributed around the world. The Argo project, an international mission, will launch 3000 floats, which will deliver salinity, column temperature, and current velocity information. Image Left: Detail of one of the buoys. Click here to view this .mpg animation. Image Right: A buoy floating at sea. Click here to view this .mpg animation. Click on the images above to open a high resolution image. Credit: NASA

The latest sea level research conducted by Dr. Steve Nerem, Associate Professor, Colorado Center for Astrodynamics Research at the University of Colorado in Boulder, and his colleagues, published in a 2004 issue of Marine Geodesy Journal, has found that recent TOPEX/Poseidon and Jason satellite observations show an average increase in global mean sea level of three millimeters a year from 1993-2005. This rate is more than 50 percent greater than the average rate of the last 50 years.

"Now the challenge is to develop an even deeper understanding of what is responsible for sea level rise and to monitor for possible future changes. That's where NASA’s satellites come in with global coverage, and ability to examine the many factors involved," said Miller.