Abdalati, who heads the Cryospheric Sciences Branch at Goddard, studies high-latitude glaciers and ice sheets. In addition to his extensive work with satellite observations of the northern polar region, he has participated in several field expeditions to Greenland and the Canadian Arctic. 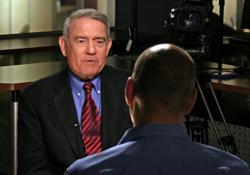 Image right: Dan Rather, left, interviews Dr. Waleed Abdalati about Arctic climate change for a segment on "Dan Rather Reports," which broadcasts on the HDNet cable and satellite channel. Click image for enlargement. Credit: NASA/Stu Snodgrass

That experience made Abdalati the perfect interview choice for a segment on "Dan Rather Reports" that focused on climate changes in the Arctic, recognized by many scientists as a bellwether for global climate change. The 20-minute segment aired as part of the show's October 2 broadcast.

Rather and Abdalati talked for roughly an hour in the Goddard Science TV studio about the significant shrinking of Arctic sea ice and the Greenland ice sheet, Abdalati said.

"[Rather] was extremely pleasant, friendly and knowledgeable," Abdalati said. "As the producers and camera-people were setting up, he was very personable, talking about fishing in Alaska, asking questions about my newly adopted daughter, and various other 'human' things. There was a certain sincerity about his interest in the topic that I found very refreshing and impressive. It is clear that he really cares about the topic."

In a time when most interviews are conducted over the phone just to get a few sound bites, Abdalati said he was struck by the fact that Rather flew down from New York just for the interview and to see high-definition data visualizations and animations from Goddard's Scientific Visualization Studio and Conceptual Imaging Lab. 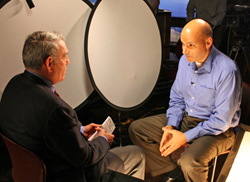 "Everyone seemed really excited to be working with him," Smith said. "But Rather took it all in stride. He was cordial to everyone and definitely at the top of his game."

Rather did not just impress Abdalati from a professional standpoint. "After watching him since I was a kid, I found the opportunity to interact with him face-to-face to be tremendously enjoyable," he said. "He really is more than a celebrity, he is an icon."