NASA Sees Rapid Changes in Arctic Sea Ice
NASA data show that Arctic perennial sea ice, which normally survives the summer melt season and remains year-round, shrunk abruptly by 14 percent between 2004 and 2005. According to researchers, the loss of perennial ice in the East Arctic Ocean was even higher, nearing 50 percent during that time as some of the ice moved from the East Arctic to the West. ?

The overall decrease in winter Arctic perennial sea ice totals 720,000 square kilometers (280,000 square miles) -- an area the size of Texas. Perennial ice can be 3 or more meters (10 or more feet) thick. It was replaced by new, seasonal ice only about 0.3 to 2 meters (one to seven feet) thick that is more vulnerable to summer melt. 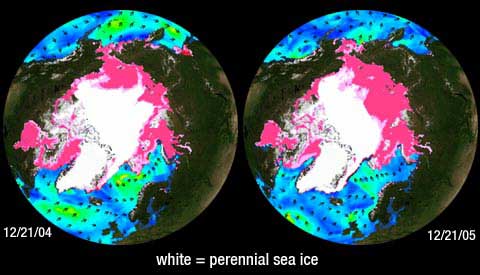 Image right: QuikScat interannual observations of sea ice over the Arctic have enabled the detection of recent drastic reduction in the extent of perennial ice and its depletion from the eastern Arctic Ocean. These changes have significant implications for Arctic environment, navigation, and resource exploration. Scatterometer data enable higher accuracy and better classification of sea ice type than other current remote sensing platforms. Image credit: NASA/JPL
+ Browse version of image

The decrease in the perennial ice raises the possibility that Arctic sea ice will retreat to another record low extent this year. This follows a series of very low ice-cover years observed over the past four summers from active and passive microwave satellite data.

A team led by Son Nghiem of NASA's Jet Propulsion Laboratory, Pasadena, Calif., used NASA's QuikScat satellite to measure the extent and distribution of perennial and seasonal sea ice in the Arctic. While the total area of all the Arctic sea ice was stable in winter, the distribution of seasonal and perennial sea ice changed significantly.

"Recent changes in Arctic sea ice are rapid and dramatic," said Nghiem. "If the seasonal ice in the East Arctic Ocean were to be removed by summer melt, a vast ice-free area would open up. Such an ice-free area would have profound impacts on the environment, as well as on marine transportation and commerce."

The researchers are examining what caused the rapid decrease in the perennial sea ice. Data from the National Centers for Environmental Prediction, Boulder, Colo., suggest that winds pushed perennial ice from the East to the West Arctic Ocean (primarily located above North America) and significantly moved ice out of the Fram Strait, an area located between Greenland and Spitsbergen, Norway. This movement of ice out of the Arctic is a different mechanism for ice shrinkage than the melting of Arctic sea ice, but it produces the same results - a reduction in the amount of perennial Arctic sea ice.

Researchers indicate that if the sea ice cover continues to decline, the surrounding ocean will get warmer, further accelerating summer ice melts and impeding fall freeze-ups. This longer melt season will, in turn, further diminish the Arctic ice cover.

Nghiem cautioned the recent Arctic changes are not well understood and many questions remain. "It's vital that we continue to closely monitor this region, using both satellite and surface-based data," he said.

This is one of three sea ice study results being released today by NASA. These findings are the result of a new study by NASA; the U.S. Army Cold Region Research and Engineering Laboratory, Hanover, N.H.; and the National Ice Center, Washington, D.C. Study results are published in a recent issue of Geophysical Research Letters.

For more information about QuikScat, visit:

For more information about NASA and agency programs, visit: