NASA Explains Puzzling Impact of Polluted Skies on Climate
NASA scientists have determined that the formation of clouds is affected by the lightness or darkness of air pollution particles. This also impacts Earth's climate.

In a breakthrough study published today in the online edition of Science, scientists explain why aerosols -- tiny particles suspended in air pollution and smoke -- sometimes stop clouds from forming and in other cases increase cloud cover. Clouds not only deliver water around the globe, they also help regulate how much of the sun's warmth the planet holds. The capacity of air pollution to absorb energy from the sun is the key. 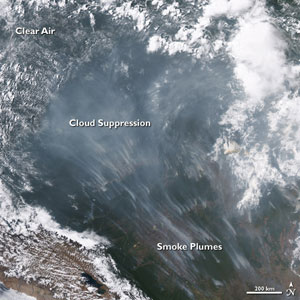 Image right: Large plumes of smoke can act as "cloud killers" because the tiny particles in this form of air pollution absorb a lot of sunlight. NASA's Aqua satellite caught this cloud-suppression process in action over western Brazil and Bolivia in September 2005. Credit: NASA

"When the overall mixture of aerosol particles in pollution absorbs more sunlight, it is more effective at preventing clouds from forming. When pollutant aerosols are lighter in color and absorb less energy, they have the opposite effect and actually help clouds to form," said Lorraine Remer of NASA's Goddard Space Flight Center, Greenbelt, Md. Remer worked closely with the study's lead author, the late Yoram Kaufman of Goddard, on previous research into this perplexing "aerosol effect."

The effect of the planet's constantly changing cloud cover has long been a problem for climate scientists. How clouds change in response to greenhouse-gas warming and air pollution will have a major impact on future climate.

Using this new understanding of how aerosol pollution influences cloud cover, Kaufman and co-author Ilan Koren of Israel's Weizmann Institute estimate the impact worldwide could be as much as a 5 percent net increase in cloud cover. In polluted areas, these cloud changes can change the availability of fresh water and regional temperatures.

In previous research by the authors, the opposite effects that aerosols have on clouds were seen in different parts of the world using data from NASA satellites. But these observations alone could not confirm that the aerosols themselves were causing the clouds to change. 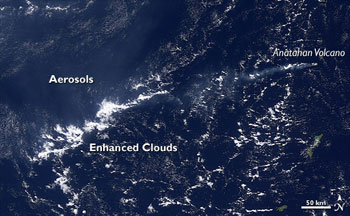 Image left: Some types of air pollution can help clouds to form and storms to grow stronger. In this April 2006 image from the NASA Terra satellite, a plume of aerosol pollution from the Anatahan volcano in the western Pacific Ocean leaves more clouds in its wake. Credit: NASA

To tackle this problem, Kaufman and Koren assembled a massive database of global observations that strongly suggests it is the darkness (absorbs sunlight) or brightness (reflects sunlight) of aerosol pollution that cause pollution to act as a cloud killer or a cloud maker. These measurements were culled from the NASA-sponsored Aerosol Robotic Network of ground-based instruments at nearly 200 sites worldwide.

No matter where in the world the measurements were taken or in what season, the scientists saw the same pattern. There were lots of clouds when light-reflecting pollution filled the air, but many fewer clouds were recorded in the presence of light-absorbing aerosols.

NASA’s satellites, computer models, and technology will continue to advance our understanding of how aerosol pollution affects the Earth’s climate. NASA’s "A-Train" of formation-flying satellites, now with the cloud-piercing instruments onboard the Cloudsat and CALIPSO spacecrafts, is helping answer challenging questions such as the role of clouds in global warming and the influence of aerosols on rainfall and hurricanes.