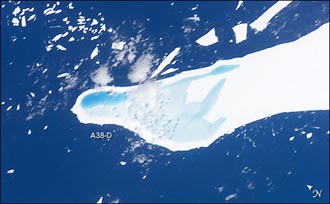 It's happened only three other times in history. But this time, the International Polar Year will have unprecedented access to an out-of-this-world platform -- 210 miles up in space.

The International Polar Year is a collaborative effort to study the Arctic and the Antarctic from March 2007 to March 2009. Crew members on the International Space Station are supporting the scientific program by taking new snapshots of Earth's polar regions -- the areas of the globe surrounding the North and South poles -- from the unique vantage point of space.

It's been 50 years since the last event like this, with previous polar years observed in 1882 and 1932. This year will have the largest number of participants, with thousands of scientists from more than 60 countries examining the polar regions in a wide range of topics, including surface and atmospheric temperatures, changes in snow and ice and the shrinkage of glaciers. They also hope to dip into unexplored areas.

Because the International Space Station provides a unique venue for observing polar phenomena, NASA has invited scientists participating in the polar program to submit requests for relevant imagery to be photographed from space. 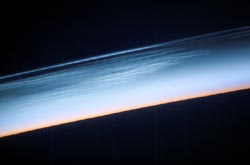 As part of the Crew Earth Observations experiment, space station astronauts photograph designated sites and dynamic events on the Earth’s surface using digital cameras equipped with a variety of lenses. Depending on the station's position and weather in the target regions, astronauts can collect high-resolution digital photos of a specific location or lower-resolution photos that cover very large areas.

During the timeframe of the International Polar Year, polar observations are a scientific focus for the Crew Earth Observations experiment; the experiment is designated CEO-IPY.

Previous space station crew members have photographed such phenomena as auroras, polar mesospheric clouds and patterns and calving of sea ice. Although the station does not cross the poles, astronauts can look toward the poles to document these phenomena.

"Polar regions are rich in phenomena obtuse to our daily temperate-region lives and naturally draw one's scientific attention, whether on or off of Earth," said NASA astronaut Don Pettit, the leader of the effort to link polar scientists with the space station. "I want IPY scientists on Earth to have access to the space station perspective, where observations can be made on the length scale of half a continent and will complement observations made on Earth or by higher orbiting satellites." 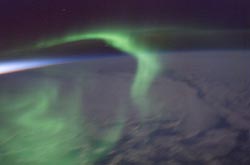 Image at right: This International Space Station image shows an aurora over the southern polar region at sunset. Credit: NASA

"This information is integrated into daily communications with the station astronauts about their photo targets, so that crew members know what kind of photos would help the scientists, and when those areas will be visible through the windows of the station," said Cindy Evans, a NASA scientist who has been developing the online scientific resources.

All photos collected are posted on the Web for downloading and then adapted into polar year projects. Examples of imagery and detailed information about scientific observations from the space station also can be downloaded from the CEO-IPY Web site.