Local Sources Major Cause of U.S. Near-Ground Aerosol Pollution
A new NASA study estimates that most ground-level particulate pollution in the United States stems from regional sources in North America and only a small amount is brought to the country from other parts of the world. 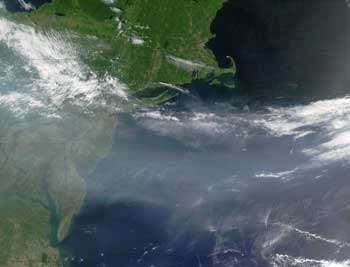 Image right: A cloud of pollution hangs over the Eastern United States in this image captured in July 2002 by NASA's Moderate Resolution Imaging Spectroradiometer (MODIS). The majority of such haze originates locally in North America, and only a small amount is imported from other continents, new research suggests. + Larger image Credit: Jacques Descloitres, MODIS Land Rapid Response Team, NASA/GSFC

Researchers using an innovative global aerosol tracking model have for the first time produced a global estimate of sources and movements of aerosols near the ground where they can affect human health and run afoul of environmental regulations. Previously, researchers studying aerosols moving between continents focused primarily on tracking a single type of aerosol, such as dust or black carbon, or measuring their quantities throughout the atmosphere. This left gaps in understanding where ground-level particulate pollution comes from.

"This is the first study to comprehensively consider the origin, composition and type of fine particles over the United States and connect them to both domestic and foreign sources." said Mian Chin, an atmospheric scientist at NASA’s Goddard Space Flight Center, Greenbelt, Md., and lead author of the study.

Aerosols are airborne particles that arise from both human sources such as burning fossil fuels, and natural sources such as fires, dust and volcanoes. They are also a major source of near-ground pollution. Since 1970, particulate matter has been regulated in the United States by the Clean Air Act. A more recent concern has been aerosols that arrive here from distant shores carried by the wind.

Chin and colleagues set out to investigate how much and what type of aerosols made the intercontinental journey in 2001. The team employed the help of a computer model using known air chemistry and wind patterns to trace a region's aerosols – everything from fossil fuel and biofuel combustion, biomass burning, and volcanic sources, desert dust and sea salt – back to their sources.

Image left: Aerosols in Earth's atmosphere can be a major source of pollution worldwide, and include fine aerosols such as pollution and smoke (red) and coarse aerosols such as dust and sea-salt (green). The left image shows aerosol levels on April 13, 2001 as seen by a NASA satellite. The map at right is a computer simulation of the same day showing that the model accurately estimates the transport of aerosols between continents. + Larger image Credit: NASA

"Using the model, we followed the path of aerosols to find out how much is local and how much is from outside a region," Chin says.

Chin and colleagues estimate that between 65-70 percent of surface particulate matter in the eastern U.S. originates from regional pollution aerosols from fuel combustion in North America. The report was in the Nov. 1 edition of the European Geosciences Union's Atmospheric Chemistry and Physics.

"Our results indicate that controlling regional pollution emissions will be the most effective and most responsible way to manage U.S. air quality," Chin says.