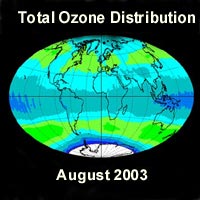 A team led by Eun-Su Yang of the Georgia Institute of Technology, Atlanta, analyzed 25 years of independent ozone observations at different altitudes in Earth's stratosphere, which lies between six and 31 miles above the surface. The observations were gathered from balloons, ground-based instruments, NASA and NOAA satellites.

The stratosphere is Earth's second lowest atmospheric layer. It contains approximately 90 percent of all atmospheric ozone. The researchers concluded the Earth's protective ozone layer outside of the polar regions stopped thinning around 1997. Ozone in these areas declined steadily from 1979 to 1997.

The abundance of human-produced ozone-destroying gases such as chlorofluorocarbons peaked at about the same time (1993 in the lowest layer of the atmosphere, 1997 in the stratosphere). Such substances were phased out after the 1987 international Montreal Protocol was enacted.

To measure ozone at different altitudes in the stratosphere, the team combined data from balloons and independent ground-based observing networks with monthly averaged satellite data. The satellite data came from five independent NASA and NOAA instruments.

Measurements were compared with computer predictions of ozone recovery that considered actual measured variations in human-produced ozone-destroying chemicals. The calculations took into account other factors that can affect ozone levels, such as sunspot cycle behavior, seasonal changes and stratospheric wind patterns.

"These results confirm the Montreal Protocol and its amendments have succeeded in stopping the loss of ozone in the stratosphere," Yang said. "At the current recovery rate, the atmospheric modeling community's best estimates predict the global ozone layer could be restored to 1980 levels-- the time that scientists first noticed the harmful effects human activities were having on atmospheric ozone — some time in the middle of this century." 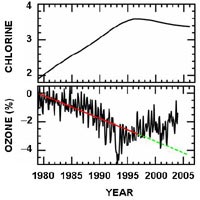 "Scientists expected the Montreal Protocol to be working in the middle and upper stratosphere and it is," said co-author Mike Newchurch of the University of Alabama in Huntsville. "The real surprise of our research was the degree of ozone recovery we found at lower altitudes, below the middle stratosphere. There, ozone is improving faster than we expected, and appears to be due to changes in atmospheric wind patterns, the causes of which are not yet well understood. Until the cause of the recent ozone increase in the lowermost stratosphere is better understood, making high-accuracy predictions of how the entire ozone layer will behave in the future will remain an elusive goal. Continued careful observation and modeling are required to understand how the ozone recovery process will evolve."

"Our study is unique because it measures changes in the ozone layer at all heights in the atmosphere, then compares the data with models as well as observations from other instruments that measure variations in the total amount of ozone in the atmosphere," said Ross Salawitch, a senior research scientist at NASA's Jet Propulsion Laboratory, Pasadena, Calif. Results are published in the latest Journal of Geophysical Research.