Ozone Levels Drop When Hurricanes Are Strengthening
Scientists are continually exploring different aspects of hurricanes to increase the understanding of how they behave. Recently, NASA-funded scientists from Florida State University looked at ozone around hurricanes and found that ozone levels drop as a hurricane is intensifying. 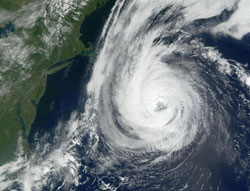 Image to right: Hurricane Erin Nears the U.S. -- On September 11, 2001, Hurricane Erin was making her way northward in the Atlantic Ocean. In this MODIS image, the storm stretches from the latitudes of Virginia in the south, past Massachusetts's boot-shaped Cape Cod, and on up to Maine. Coastal areas along the eastern seaboard have been affected by large swells produced by the storm. Credit: NASA/GSFC, MODIS Rapid Response Team

In a recent study, Xiaolei Zou and Yonghui Wu, researchers at Florida State University found that variations of ozone levels from the surface to the upper atmosphere are closely related to the formation, intensification and movement of a hurricane.

They studied ozone levels in 12 hurricanes and looked at total ozone levels, that is, from the ground to the upper atmosphere. Now scientists have clues on how a hurricane behaves when the ozone levels are high and low.

Zou and Wu noticed that over 100 miles, the area of a hurricane typically has low levels of ozone from the surface to the top of the hurricane. Whenever a hurricane intensifies, it appears that the ozone levels throughout the storm decrease. When they looked at the storm with ozone data a hurricane's eye becomes very clear. Because forecasters always try to pinpoint the eye of the hurricane, this knowledge will help with locating the exact position and lead to better tracking. 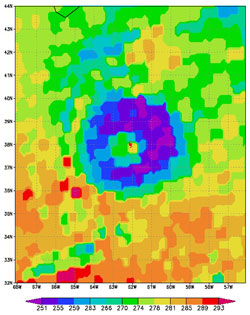 Image to left: Ozone Around Hurricane Erin -- This image shows the distribution of total ozone in and around Hurricane Erin on 12 September, 2001. Erin is represented in the middle of the image by a red dot with two "arms." The ozone level within the center of the hurricane is high (depicted in green). Surrounding the hurricane are lower levels of total ozone (depicted in blue). Within the core of the hurricane there is a weak downward motion which brings down ozone rich air from the upper atmosphere into the core of hurricane and therefore increases the total ozone there, while upward lift of atmosphere is dominant surrounding the hurricane eyewall. Credit: Florida State University

The National Oceanic and Atmospheric Administration's National Hurricane Center (NHC) is the agency that issues hurricane forecasts. Out of the 12 storms analyzed, the ozone data and the NHC official report differed on the mean distance between the estimated eye by less than 18 miles during the most intense stage of the storms. As such, when Zou and Wu added the satellite observed ozone levels around a hurricane into a computer forecast model, it greatly improved the predicted track that the hurricane would take. 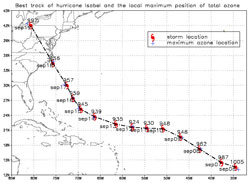 Image to right: Hurricane and Maximum Ozone -- This image shows the locations of both Hurricane Isabel (red circle with "arms") and the local maximum of total ozone (+) within the September 2003 hurricane. It is clear how closely the hurricane and the ozone levels track when the storm is intensified. Credit: Florida State University

The other interesting finding when analyzing ozone data around hurricanes, is that ozone levels give a clue that a storm will develop before other methods. The early spin of a tropical cyclone is weak and sometimes covered by clouds, and not easily detected by satellites that provide pictures of clouds. The ozone data gives scientists a "look beyond the clouds."

Ozone is all around the world and in the upper and lower atmosphere. Ozone in the upper atmosphere protects life on Earth from harmful ultraviolet rays from the sun, which can cause sunburn and skin cancer. Ozone close to the surface is a pollutant, which on hot, humid days with little wind creates a haze, such as that over big cities, that is harmful to breathe.

By using NASA's satellite Earth Probe/ TOMS total ozone data, forecasters can identify ozone amounts that are closely related to the formation, intensification, and movement of a hurricane. Zou and Wu also found a strong relationship between ozone, air pressure and spin within the hurricanes. 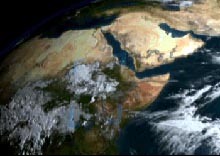 Image left: NASA Sees Hurricane Isabel from Cradle to Grave -- In 2003, a hurricane named Isabel was born out of Africa on August 22. As she moved across the warm open waters of the Atlantic Ocean, she grew up, she gained strength, and she packed her bags for the United States. Credit: NASA

Zou said that the connections between ozone levels and hurricane behavior are a very important step in understanding the storms.