NASA Helps Weed Our National Garden
NASA and other federal agencies are using satellites that circle the Earth to help weed out a plant that's affecting water supplies in the U.S. west. 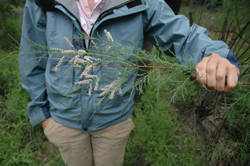 Image left: Researchers use satellites to measure sunlight reflected off plants and their environments in which they are growing. The changing colors of the Tamarisk, or saltcedar, plant aided researchers in creating the National Tamarisk Map. Click on image to view full resolution.

Invasive plant species traditionally are located, identified and monitored by manual ground surveys. Such surveys are effective, but expensive, time consuming and difficult to manage over large areas. Now, a new tool developed by the U.S. Geological Survey (USGS) is taking advantage of observations from NASA satellites and NASA engineering to provide a service for land managers that predicts quickly and inexpensively the location and spread of invasive plants over regional areas. The tool, called the Invasive Species Forecasting System (ISFS) was recently used to make the first predictive map of tamarisk habitat in the United States. 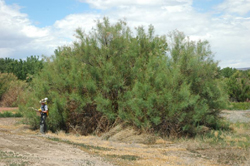 Image right: Experts estimate that one large tamarisk plant has the potential to absorb up to 200 gallons of water per day – that’s twice the amount the average person uses in the same timeframe. Click on image to view full resolution.

Tamarisk is a large shrub to small tree native to Africa and Eurasia. It was introduced in the western U.S. in the early 1800s as "ornamental vegetation" and for wind and erosion control. Tamarisk has since spread and can be found from Minnesota to California and from Mexico to Canada. The U.S. Department of Agriculture recently identified tamarisk as one of the most harmful invasive species in the nation, because the plant’s long roots tap into underground aquifers. Its groundwater-absorbing qualities may be adding to the severity of the drought in the western U.S. Tamarisk also increases the salt concentration of the soil and degrades habitats for native species along river systems.

"The ISFS combines NASA satellite data with tens of thousands of field sampling measurements," said Tom Stohlgren, director of the USGS NIISS. All of that data are then used to look at where non-native (or plants that normally don't grow in a place) existed in the past, or where they exist today. Then, the ISFS tool can help predict where the invasive plants may grow or spread. People that manage lands, especially water supplies in the U.S. west, can use the color-coded maps that the ISFS produces to help predict and manage the spread of troublesome invasive species. 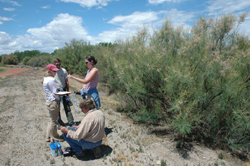 Image left: Researchers now estimate that tamarisk has infested more than 3.3 million acres in the western United States. With the invasion spreading like wildfire, this invasive poses a serious threat to the West’s water supply. Click on image to view full resolution.

ISFS uses data from NASA’s Terra, Aqua, and Earth Observing-1 satellites, and the USGS Landsat satellites, together with field data from government and non-government contributors. All of these satellites observe and measure sunlight reflected by plants and the environments in which they are growing. The satellites are able to "lock in" on some of the reflected light to determine tamarisk’s current locations as well as places where it may spread.

"Satellite data and computer modeling helps us understand where tamarisk is likely to be growing, even in remote locations that field researchers cannot easily reach," said John Schnase, principal investigator of the ISFS project at NASA’s Goddard Space Flight Center in Greenbelt, Md.

Currently, USGS is using the ISFS to predict the spread of other species such as cheatgrass, Canadian star thistle, and certain aquatic species.