Image above left: Tamarisk Invades the Western U.S.: One example of an invasive species that is damaging our natural areas and resources in the Western United States is the tamarisk plant, also known as "salt cedar." This video shows a stream-side area that has been infested by tamarisk. All the light green vegetation you see in this drainage is salt cedar. Credit: NASA. Image above right: Tamarisk Invading Stream Beds: Some invasive species pose an immediate threat to our natural resources because of the speed with which they are spreading. This animation highlights some estimates that the invasive plant tamarisk is spreading down stream beds as fast as 12 miles a year. Credit: NPS

What is an invasive species? An "invasive species" can be plants, animals, and other organisms, such as microbes, minute life forms, such as bacteria that cause disease. Usually, invasive species are brought to environment they don't belong in, because people bring them there. Its introduction causes or is likely to cause economic or environmental harm, or harm to human health.

One plant that became an invasive species in the U.S. is the Giant Hogweed. It was brought over from Europe or Asia around 1917 for use as an ornamental plant. It grows from 8 to 14 feet high and has thick stems with purple blotches and coarse hairs. Giant hogweed grows in moist soils along roadsides and stream banks. It is a dangerous, poisonous plant that should not be touched. Another example is Salt Cedar, an invasive plant now widespread in the western U.S. It has replaced native species and may have significant negative effects on water resources. 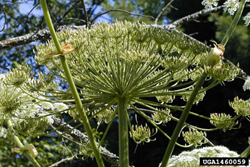 Image to right: Giant Hogweed: Giant Hogweed or Cartwheel-Flower is a relative of the carrot and parsley family. It can reach a height of 15 to 20 feet when flowering. The plant has hollow stems, 2 to 4 inches around with dark reddish-purple spots and bristles. The growing season starts in late March, with full height and flowering being reached in late June and July. The umbrella-shaped flower heads of giant hogweed can measure up to 2.5 feet in diameter across a flat top. Click on image to enlarge. Credit: InvasiveSpecies.gov and Donna R. Ellis, U of CT

NASA satellite data will be used by the other federal agencies to help locate various plants. The satellites will use bands of color from the spectrum to see the Sun’s light reflected by different plants and the environments in which they are growing. The satellites will lock in on the combination of bands of color to determine an invasive plant's current locations and areas that may develop a future invasion. Scientists are working now with the satellite data to see different plants.

"NASA is pleased with the invitation to join the National Invasive Species Council (NISC) and eager to assist in the control of invasive species that threaten U.S. agriculture, ecosystems, water resources and public health," said Edwin Sheffner, manager of the invasive species program element in the Applied Sciences Program at NASA Headquarters, Washington. Monitoring and getting rid of invasive species costs the country tens of billions of dollars yearly. 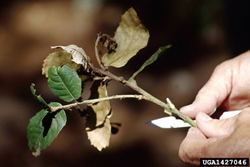 Image to left: Sudden Oak Death - The Fungus that Causes It: Phytophthora ramorum is a fungus that causes the disease known as Sudden Oak Death (SOD). Depending on the plant species, its infection may occur on the trunk, branches, and/or leaves of a tree. Infections on the woody portions of a tree are referred to as cankers. Cankers on the trunk of oak and tanoak trees are the most damaging, and often lead to death. This fungus thrives in cool, wet climates. Click on image to enlarge. Credit: Joseph O'Brien, USDA Forest Service

NASA has agreed to make its satellite observations of the Earth, computer modeling and engineering experience available to the NISC, to improve the ability to help control and destroy invasive species that are harming the environment in the U.S. NASA's track record of achievement in the realm of invasive species monitoring led to NISC's invitation to the agency to join the Council.

Everyone should know about invasive species. Some may already be lurking in your garden.

Image to right: Gypsy Moth: The Gypsy moth is highly destructive to trees. Pictured here are the adult European/North American female (top) and male (bottom). Introduced in Massachusetts in 1869, the Gypsy moth is a plain-looking insect, usually noticeable in its caterpillar stage. A female moth lays a cluster of eggs on and near trees, and each cluster can hatch up to a thousand tiny caterpillars. They are one of the most destructive leaf eaters of hard and softwood trees, and feed on over 500 species of trees and shrubs. Click on image to enlarge. Credit: USDA APHIS PPQ

The invitation to NASA to join the NISC is recognition of partnerships between NASA and NISC members in understanding and combating invasive species on Earth, as well as NASA’s unique role in preventing biological contamination that may be carried by space missions.

NASA scientists at the Goddard Space Flight Center in Maryland are assisting the U.S. Geological Survey, the federal agency that keeps track of invasive species. They will work together to share Earth observations from NASA satellites, including Landsat, Terra, Aqua and the EO-1 satellites in the fight against these plants, insects and microbes that don't belong and harm the environment.

For more information about the Invasive Species Council, please visit on the Internet: www.invasivespecies.gov

For the list of partnering Federal agencies on the NISC, please visit: http://www.invasivespecies.gov/council/agencies.shtml

For more information about NASA's work on the NISFS, please visit: http://InvasiveSpecies.gsfc.nasa.gov