'Imported' Pollution Tied to Poor Air Quality in Texas
Scientists using NASA satellites and other data including computer models and ground sensors have demonstrated the impact that pollutants traveling even thousands of miles can have on air quality. 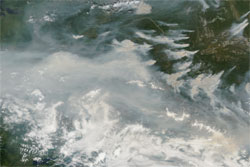 A study in the September Journal of Geophysical Research concludes that ozone pollution levels increased significantly in the atmosphere above Houston on July 19 and 20, 2004, in part as a result of smoke transported into the area from forest fires raging in Alaska and Canada.

The study is one of only a few that has quantitatively examined the impact of remotely generated pollutants on air quality in the lower atmosphere. The scientists found that in the course of a week, pollutants from the forest fires traveled to Houston, where they contributed to poor air quality on at least two days. 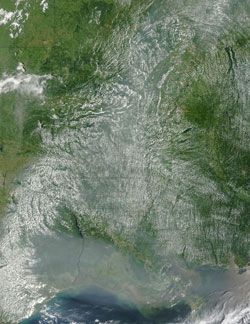 As part of the NASA-led Intercontinental Chemical Transport Experiment-North America (INTEX-NA) field campaign during the summer of 2004, researchers sampled a variety of trace gases and aerosols -- tiny particles suspended in the air -- across North America. During the campaign, forest fires in western Canada and eastern Alaska were consuming more acres than at any time during the last 50 years. Meteorological conditions carried smoke from these intense fires eastward and southward to the U.S. Gulf Coast.

"The combination of our balloon-borne ozone data and observations by NASA satellites, aircraft, and a network of ground stations provided unprecedented insight into the origins of locally poor air quality in Houston on those two days," said study lead author Gary Morris of Valparaiso University, Valparaiso, Ind.

The researchers relied on imagery from NASA's Moderate Resolution Imaging Spectroradiometer on the Terra satellite, aerosol data from the Total Ozone Mapping Spectrometer satellite, and carbon monoxide data from the Atmospheric Infrared Sounder on the Aqua spacecraft to track the movement of an air mass that originated from the region of forest fires in western Canada and eastern Alaska on July 12–13, 2004. The air mass traveled across Canada, through the mid-western United States, and all the way to Houston, arriving there on July 19.

Image above: This image shows the total amount of carbon monoxide as measured by the Measurements of Pollution in the Troposphere (MOPITT) instrument aboard NASA’s Terra satellite. High levels of pollution are indicated by yellow and red colors, and blue indicates low pollution. Smoke from Canadian forest fires contributed to the high pollution levels over southern Alaska, western Canada, and the midwestern United States. + High resolution image Credit: NCAR/NASA

"We found that with the arrival of the pollutants associated with these forest fires, ozone levels increased between 50-100 percent in the first 5 kilometers over Houston," said Morris. Meteorological conditions, the smoke from the distant forest fires, and the typical urban pollution generated in the Houston area provided a potent mix for enhancing local ozone concentrations. 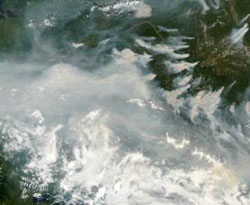 Balloon-borne data and ground observations combined with data from NASA's suite of satellites and computer models will continue to advance our understanding of the impact of pollutants on air quality. Such information will help enable environmental managers to improve air quality forecasts and propose more effective air quality solutions.