Hurricanes Help Ocean Deserts to Bloom
Whenever a hurricane races across the Atlantic Ocean, chances are phytoplankton will bloom behind it. According to a new study using NASA satellite data, these phytoplankton blooms may also affect the Earth's climate and carbon cycle. 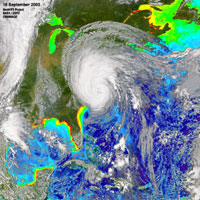 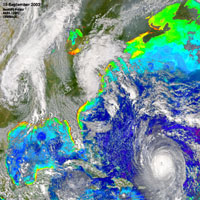 Images to right: For two to three weeks following almost every storm, the SeaWiFS data showed greater-than-normal phytoplankton growth, stimulated by the additional nutrients brought up to the surface. SeaWiFS took the following images of Hurricane Isabel on September 13th and 18th of 2003. As the hurricane passes, it leaves behind it a trail of plankton blooms, evident by the rapid change in chlorophyll amounts. The lighter blue areas in the hurricane's wake represent higher amounts of chlorophyll. Click on either image to view animation. (855 Kb) Credit: NASA/Orbimage

"Some parts of the ocean are like deserts, because there isn't enough food for many plants to grow. A hurricane's high winds stir up the ocean waters and help bring nutrients and phytoplankton to the surface, where they get more sunlight, allowing the plants to bloom," Babin said.

Image to right: As a hurricane passes over the Atlantic, cooler water brings phytoplankton and nutrients to the surface. Bigger storms cause larger plankton blooms and more plankton absorb a greater amount of carbon from our atmosphere. As phytoplankton die, a major portion sink to the bottom of the ocean, becoming what oceanographers call "marine snow." Click on image to view animation (2.5 MB) Credit: NASA

Previous research has relied largely on sporadic, incomplete data from ships to understand how and when near-surface phytoplankton bloom. "This effect of hurricanes in ocean deserts has not been seen before. We believe it is the first documented satellite observation of this phenomenon in the wake of hurricanes," Babin noted. "Because 1998 was the first complete Atlantic hurricane season observed by this instrument, we first noticed this effect in late 1998 after looking at hurricane Bonnie," Babin said.

The study found the physical make-up of a storm, including its size, strength and forward speed, is directly related to the amount of phytoplankton that blooms. Bigger storms appear to cause larger phytoplankton blooms. Larger phytoplankton should have more chlorophyll, which satellite sensors can see.

Hurricane-induced upwelling, the rising of cooler nutrient-rich water to the ocean surface, is also critical in phytoplankton growth. For two to three weeks following almost every storm, the satellite data showed phytoplankton growth. Babin and his colleagues believe it was stimulated by the addition of nutrients brought up to the surface.

Image to left: Using five years of data from the SeaWiFS instrument, scientists have taken the Earth's pulse. Every spring, phytoplankton spread across the North Atlantic in one of the largest "blooms" on the planet. In this visualization, the phytoplankton colony shown in green covers an area larger than the Amazon rainforest in South America. Click on image to view animation (6.5 MB) Credit: NASA/Orbimage

Whenever the quantity of plants increases or decreases, it affects the amount of carbon dioxide in the atmosphere. As phytoplankton grow, they absorb carbon dioxide, a heat-trapping greenhouse gas. The gas is carried to the ocean floor as a carbon form when the tiny plants die. This enables atmospheric carbon to get into the deep ocean. It is one of several natural processes that contribute to Earth's carbon cycle.

By stimulating these phytoplankton blooms, hurricanes can affect the ecology of the upper ocean. Phytoplankton is at the bottom of the food chain. The factors that influence their growth also directly affect the animals and organisms that feed on them. In addition, since climate-related phenomena like El Niño may change the frequency and intensity of hurricanes, storm-induced biological activity may have even greater contributions to future climate change.

Scientists are still trying to determine how much carbon dioxide might be removed from such a process. "Better knowledge of the carbon cycle will improve our understanding of global ecology and how climate change might affect us," Babin said. 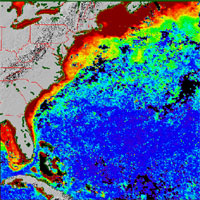 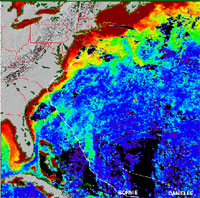 Images to left: NASA's SeaWiFS instrument took the data for these before-and-after Hurricane Bonnie images. The excess chlorophyll is evident off the coast as a bright green patch. These two images developed by Dr. Babin in August 1998 first alerted his team to the phytoplankton blooms left in a hurricane's wake. Credit: JHUAPL

NASA's Earth Science Enterprise funded part of the research. The Enterprise is dedicated to understanding the Earth as an integrated system and applying Earth System Science to improve climate, weather, and natural hazard prediction using the unique vantage point of space.