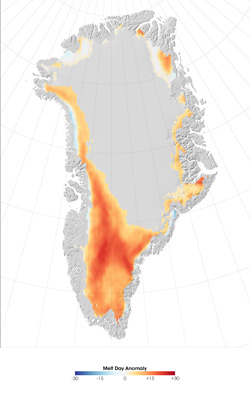 A new NASA-supported study reports that 2007 marked an overall rise in the melting trend over the entire Greenland ice sheet and, remarkably, melting in high-altitude areas was greater than ever at 150 percent more than average. In fact, the amount of snow that has melted this year over Greenland is the equivalent of more than twice the surface size of the U.S.

Marco Tedesco, a research scientist at the Joint Center for Earth Systems Technology, cooperatively managed by NASA's Goddard Space Flight Center in Greenbelt, Md., and the University of Maryland at Baltimore County, used satellite data to compare average snow melting from 1988-2006 with what has taken place this summer. He found that in high altitude areas over 1.2 miles above sea level, the melting index -- an indicator of where melting is occurring and for how long - was significantly higher than average. Melting over those areas occurred 25-30 days longer this year than the observed average in the previous 19 years.

"When snow melts at those high altitudes and then refreezes, it can absorb up to four times more energy than fresh, unthawed snow," said Tedesco. "This can affect Earth's energy budget by changing how much radiation from the sun is absorbed by the Earth versus that reflected back into the atmosphere. Refrozen snow can also alter the snow density, thickness and snow-water content." Tedesco's findings were published Sept. 25 in the American Geophysical Union's Eos newspaper.

"This record melting index in those areas came as a bit of a surprise, showing us, once again, the extreme variability and complexity of these processes," said Tedesco. His expertise in documenting melting trends produced other recent studies on increased snow melting over Greenland and the Antarctic.

The data collected by the Special Sensor Microwave Imagers on the Defense Meteorological Satellite Program satellites provided Tedesco with insight into how much of an electromagnetic signal was naturally emitted by snow and ice in areas beneath the satellite overpass. The microwave instruments can detect melting above and below the snow surface. The data were processed at the National Snow and Ice Data Center in Boulder, Colo., in just 24 hours after the satellite overpass, enabling Tedesco to quickly spot changes that could signal a melting trend or new record.

Tedesco's work also confirmed that the melting index this year in lower altitude areas of Greenland, though not record breaking, was higher than average by 30 percent, placing 2007 in fifth place for the highest melting index after 2005, 2002, 1998 and 2004, in that order.

"Increases in the overall melting trend over Greenland have an impact that stretches beyond its icy shores," said Tedesco. "Aside from contributing to direct sea level rise, melting especially along the coast can speed up glaciers since the meltwater acts like a lubricant between the frozen surface and the bedrock deep below. The faster glaciers flow, the more water enters the ocean and potentially impacts sea level rise." Tedesco, along with U.S. and European colleagues, plans to combine satellite data with related climate model results. He plans to visit Greenland in 2008 to compare his findings from space-borne data with those obtained by ground-based sensors, all with an eye to gathering further clues of what is happening on Greenland.