"There is the potential for extremely hot summertime temperatures in the future, especially during summers with less-than-average frequent rainfall," said lead author Barry Lynn of NASA's Goddard Institute for Space Studies and Columbia University, New York.

The research found that eastern U.S. summer daily high temperatures that currently average in the low-to-mid-80s (degrees Fahrenheit) will most likely soar into the low-to-mid-90s during typical summers by the 2080s. In extreme seasons – when precipitation falls infrequently – July and August daily high temperatures could average between 100 and 110 degrees Fahrenheit in cities such as Chicago, Washington, and Atlanta. 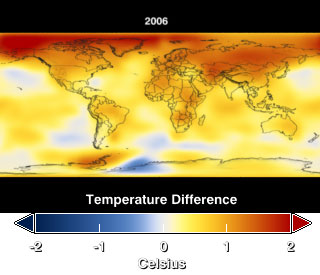 Image/animation right: The animation to the right shows a basic demonstration of the increase in annual mean temperature in five year increments from 1880 through 2006. Warmest temperatures are in red. Click image to view animation. + Click for hi-res still image Credit: NASA/GISS

The global model, one of the models used in the recently issued climate report by the Intergovernmental Panel on Climate Change (IPCC), was utilized in this study to identify future changes in large-scale atmospheric circulation patterns due to the build up of greenhouse gases. This information was then fed into the weather prediction model to forecast summer-to-summer temperature variability in the eastern United States during the 2080s. The weather model showed that extreme summertime surface temperatures developed when carbon dioxide emissions were assumed to continue to increase about two percent a year, the "business as usual" scenario. These findings are too recent to be included in the latest IPCC report.

The weather prediction model used in this research is advantageous because it assesses details about future climate at a smaller geographic scale than global models, providing reliable simulations not only on the amounts of summer precipitation, but also on its frequency and timing. This is an important capability for predicting summer temperatures because observed daily temperatures are usually higher on rainless days and when precipitation falls less frequently than normal.

The global model simulated rainfall too frequently, so that its surface temperatures were not appropriately sensitive to interannual changes in Pacific sea surface temperatures. "Since the weather prediction model simulated the frequency and timing of summer precipitation more reliably than the global model, its daily high temperature predictions for the future are also believed to be more accurate,” added co-author Leonard Druyan, NASA Goddard Institute for Space Studies and Columbia University.

In comparison, the researchers say that a number of the global models used in previous studies of future climate change predict too frequent precipitation that often falls too early in the day. As a result, they tend to underestimate the amount of future warming by reflecting solar radiation back to space before it can warm the surface and by simulating excessive evaporation from the wet ground.

To the authors' knowledge, this is the first study that has documented the impact of precipitation simulation imperfections on model predictions of surface air temperature. "Using high-resolution weather prediction models, we were able to show how greenhouse gases enhance feedbacks between precipitation, radiation, and atmospheric circulations that will likely lead to extreme temperatures in our not so distant future," said Lynn.

The study is published in the April 2007 issue of the American Meteorological Society's Journal of Climate.