TRMM Satellite Proves El Nino Holds the Reins on Global Rains
NASA and Japan's Tropical Rainfall Measuring Mission (TRMM) satellite has enabled scientists to look around the globe and determine where the year-to-year changes in rainfall are greatest. Recently, scientists found that the El Nino-Southern Oscillation is the main driver of the change in rain patterns all around the world.

Image to right: Year-On-Year Rain Change Index -- This NASA-created index map condenses 5 years of rainfall data from 1998 to 2003. The colored areas show annual changes in rainfall. Areas in blue receive more rain whenever areas in red experience a shortfall, and vice versa. The year-on-year change in rain is smallest in the green areas. The global pattern confirms that El Nino is the second biggest factor in changing how and where rain falls around the world. Click on image to enlarge. Credit: TRMM/NASA/JAXA

El Ninos occur when waters in the Central equatorial Pacific Ocean warm. El Nino - Southern Oscillation (ENSO) marks a see-saw shift in surface air pressure between Darwin, Australia and the South Pacific Island of Tahiti. When the pressure is high at Darwin it is low at Tahiti and vice versa. El Nino, and its sister event La Nina, are the extreme phases of this southern oscillation, with El Nino referring to a warming of the eastern tropical Pacific, and La Nina a cooling. Both El Nino and La Nina change weather patterns around the world.

Drs. Ziad S. Haddad and Jonathan P. Meagher of NASA's Jet Propulsion Laboratory, Pasadena, Calif. and Robert F. Adler and Eric A. Smith of NASA's Goddard Space Flight Center, Greenbelt, Md. used TRMM data to identify the areas around the world where year-to-year changes of rainfall between 1998 and 2003 was greatest.

Image to left: Month-to-Month Rainfall Index -- This NASA-created index map shows month-to-month changes in rain around the world. Areas in red experience an increase in rainfall whenever areas in blue experience a decrease, and vice versa. Areas with the weakest changes appear in green. Since the monthly change in rain is due to the changing seasons (the biggest factor affecting rainfall), the blue and red areas generally fall in opposite hemispheres. Notice that the change is most pronounced over the landmasses. Click on image to enlarge. Credit: TRMM/NASA/JAXA

By studying the rain patterns in these areas over the last 50 years, they established that the main component of this change in rainfall around the world is directly correlated with ENSO.

Haddad and his colleagues compared the local changes in rainfall all around the globe. For years, scientists have known that El Nino drastically modifies rainfall patterns in many regions. For example, Indonesia and the Northeastern Amazon basin consistently suffer droughts during El Nino and excessive rains during La Nina. The Southeastern United States and California are typically wetter-than-usual during El Nino and drier-than-usual during La Nina. 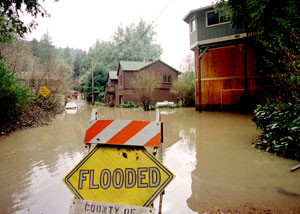 However, scientists have also known that several regions with abundant rain do not clearly reflect the El-Nino/La-Nina changes. Examples include the Bay of Bengal, the Western Indian Ocean and the vast expanse of the Western Pacific Ocean between the Marshall Islands, Micronesia and the Marianas.

Until the launch of TRMM in 1997, it was impossible to accurately measure change in global rainfall patterns because no instruments were available to record rainfall all around the planet. TRMM uses microwave technology to probe through clouds and estimate how much rainfall they are producing. The TRMM data are invaluable over areas where there are no rain gauges, such as the open ocean. 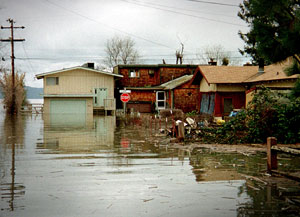 Using TRMM's measurements, the researchers were able to condense the year-to-year change in rainfall patterns into a single rain-change index. Rainfall data from land and island stations were used to extend this index back in time and to compare it with the ENSO indicators. The results showed a strong relationship between the rainfall patterns and ENSO. "The fact that the rain-change index, which comes directly from global measurements, tracks the ENSO indices from the 1950's to the present confirms that El Nino is the principal driver of global year-to-year rainfall change," Haddad said.

The Tropical Rainfall Measuring Mission is a joint mission between NASA and the Japan Aerospace Exploration Agency (JAXA).

Image above: El Nino to La Nina and Neutral -- This animation shows a view of the warmer waters of El Nino in the eastern Pacific Ocean (in red) in 1998, changing to the cooler (blue) waters of a La Nina event, before conditions become neutral. Click on image to view animation (4.4 MB). Credit: NASA/Goddard Space Flight Center Scientific Visualization Studio

TRMM is the first "space-based rain gauge" that uses microwaves to "see" how much precipitation falls from clouds around the tropics over land and ocean with unparalleled accuracy. To follow TRMM, NASA plans to launch the Global Precipitation Measurement mission in the future.

TRMM Sees Rain From Hurricanes Fall Around the World

A "Hot Tower" Above the Eye Can Make Hurricanes Stronger