Anticipating Earthquakes
High above Earth where seismic waves never reach, satellites may be able to detect earthquakes -- before they strike


"... temperatures will be in the high 40s to low 50s, fair and breezy -- another chilly day here in the San Francisco Bay Area," the T.V. weatherman says. "The satellite earthquake forecast shows low to normal risk, with no critical crustal stresses or infrared signatures around the San Andreas fault ..."

For many people, earthquakes are synonymous with unpredictability. They strike suddenly on otherwise normal days, and despite all the achievements of seismology, scientists still can't provide warning of an impending quake in the way that weathermen warn of approaching storms.

Although earthquakes seem to strike out of the blue, the furious energy that a quake releases builds up for months and years beforehand in the form of stresses within Earth's crust. At the moment, forecasters have no direct way of seeing these stresses or detecting when they reach critically high levels.

That may be changing, however. Satellite technologies being developed at NASA and elsewhere might be able to spot the signs of an impending quake days or weeks before it strikes, giving the public and emergency planners time to prepare.

"There are several satellite-based methods that show promise as precursors to earthquake activity," says Jacob Yates, a researcher at NASA's Goddard Space Flight Center. "One method is Interferometric-Synthetic Aperture Radar (InSAR). Basically, InSAR is when two radar images of a given tectonic area are combined in a process called data fusion, and any changes in ground motion at the surface may be detected."

This technique is sensitive enough to detect slow ground motions as tiny as 1 mm per year. That kind of sensitivity, combined with the landscape-wide view that satellites can offer, lets scientists see the tiny motions and contortions of land around a fault line in more detail than ever before. By watching these motions, they can figure out where points of high strain are building up.

Image below: An InSAR image showing the shift in the ground height due to the 1999 Hector Mine earthquake. The radar data were acquired by the European Space Agency ERS-2 satellite on September 15 and October 20, 1999. [more] 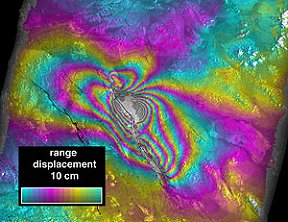 A group of NASA and university scientists led by Carol Raymond of JPL recently studied the feasibility of forecasting earthquakes from space. Their report, which was released in April, outlines a 20-year plan to deploy a network of satellites--the Global Earthquake Satellite System (GESS) -- using InSAR to monitor fault zones around the world.

With some practice, says Raymond, scientists eventually should be able to use the InSAR data to infer when stresses in the Earth's crust have reached a dangerous level, issuing a monthly "hazard assessment" for a given fault. Forecasters might report that the likelihood of having a major quake on, say, the San Andreas fault during the coming month is 2%, or 10%, or 50%.

Current methods are less certain. For example, the US Geological Survey recently released an updated assessment of the earthquake risk in the San Francisco Bay Area based on the seismic history of the area, its geology, and computer models. The study reported a 62% chance of a major quake (magnitude 6.7 or greater) hitting the area sometime within the next 30 years--not exactly something to plan your day around.

InSAR is one way to forecast quakes, but perhaps not the only one. While InSAR satellites merely improve the data available to orthodox seismology, there are other techniques that break with orthodoxy.

One of these ideas is to look for surges in infrared (IR) radiation. Friedemann Freund, adjunct professor of physics at San Jose State University and a scientist at NASA's Ames Research Center, explains: "In the 1980s and 90s, Russian and Chinese scientists noticed some strange thermal anomalies associated with earthquakes in Asia--for example, the 1998 Zhangbei earthquake near the Great Wall of China. This earthquake occurred when ground temperatures in the region were around -20o C. Just before the quake, thermal sensors detected temperature variations as large as 6o to 9o, according to Chinese documents." 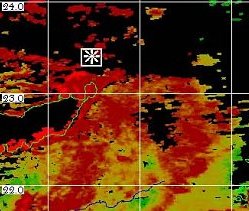 Satellites equipped with IR cameras could be used to detect these hot spots from space. In fact, when Freund and colleague Dimitar Ouzounov of the Goddard Space Flight Center (GSFC) examined infrared data collected by NASA's Terra satellite, they discovered a warming of the ground in western India just before the powerful January 26, 2001, quake in Gujarat. "The thermal anomaly was as large as +4 C°," says Freund.

What causes rocks under pressure to emit infrared radiation? No one is certain. The frequency spectrum of the emissions shows that internal heat from friction -- e.g., rocks rubbing together -- is not responsible for the radiation.

In one laboratory experiment, Freund and colleagues placed red granite blocks under a 1,500 ton press--mimicking in some ways what happens miles below Earth's surface. A sensitive camera developed at JPL and GSFC monitored the rock and detected infrared emissions. Furthermore, a voltage built up on the rock's surface. This leads Freund to believe the cause might be electrical.

Image below: When red granite is subjected to extreme crushing pressures in the laboratory, as in this experiment conducted by Freund and colleagues, its surface emits infrared radiation. [more] 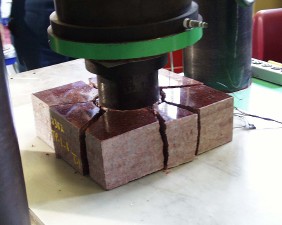 Ordinary rocks are insulators. Rocks placed under great stress, however, sometimes act like semiconductors. Freund believes that, before a quake, pairs of positive charges called 'defect electrons' or 'positive holes' split up and migrate to the surface of stressed rocks. There they recombine with each other and, in the process, release infrared radiation. This explanation has some support from experiments, but it's still a young theory that hasn't gained widespread acceptance among scientists, he notes.

Electrical currents in rock might explain another curious observation: Scientists doing research with magnetometers just before major earthquakes have serendipitously recorded tiny, slow fluctuations in Earth's magnetic field. One example happened during the Loma-Prieta earthquake that devastated San Francisco in 1989. Almost 2 weeks before the quake, readings of low-frequency magnetic signals (0.01-0.02 Hz) jumped up to 20 times above normal levels, and then spiked even higher the day of the quake.

The cause of these signals is unknown. In addition to Freund's idea, theories include the movement of deep, ion-conducting groundwater into cracks opened up by the crushing of rocks, electromagnetic energy released by electrons that are sheered from crystalline rocks such as granite, and a piezo-magnetic effect triggered by pressure applied to certain kinds of rocks.

A company called QuakeFinder is hoping that these faint magnetic signals (typically less than 1 nanotesla) can be detected by a satellite in low-Earth orbit. Ground-based sensors can detect these fluctuations as well, but polar-orbiting satellites have the advantage of covering most of the Earth's surface each day.

On June 30, 2003, Quakefinder launched QuakeSat. Measuring only 4 in. x 4 in. x 12 in., the satellite will operate for a year to see whether it can sift out magnetic signals generated by tectonic activity. The first six months of the mission will be spent calibrating the satellite and gathering baseline data. After that ground controllers will be looking in earnest for quakes.

Both the infrared and magnetic methods of quake detection are controversial. For now InSAR seems to be a safer bet for earthquake forecasting. All three, however, offer a tantalizing possibility: Someday the local weather report will forecast not only of the storms above us, but also the ones brewing beneath our feet.