A NASA-funded study published in the July 26, 2006 Journal of Geophysical Research-Atmospheres found that during April-May 2003, large amounts of smoke, which include aerosols -- tiny particles suspended in the air -- from biomass burning in the Yucatan Peninsula and southern Mexico reached Texas, Oklahoma, and other areas in the southeastern United States. 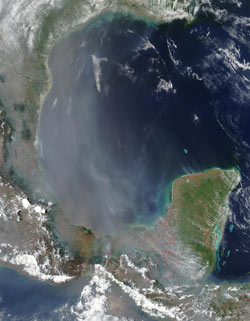 Image right: A thick haze of smoke covers much of the Gulf of Mexico and southern Texas in this true-color Moderate Resolution Imaging Spectroradiometer (MODIS) image from the Aqua satellite on May 9, 2003. Smoke from fires (red dots) burning across southern Mexico and Central America spread northward. Click image to enlarge. Credit: NASA/MODIS Rapid Response Team

The smoke plumes degraded visibility and air quality in coastal regions along the Gulf of Mexico and resulted in the greatest concentration of small particulate matter in southern Texas since 1998. By blocking incoming sunlight, the smoke plumes also cooled surface air temperatures over land. But higher in the atmosphere the smoke absorbed solar radiation and warmed temperatures. This created a circulation pattern that trapped smoke aerosols in the lower atmosphere, worsening air quality.

The researchers used a newly developed computer model to simulate the transport and effects of smoke in the atmosphere and on the Earth's surface. The model couples aerosol properties with meteorology and uses hourly smoke emission data from the NASA-led Fire Locating and Monitoring of Burning Emissions (FLAMBE) project. FLAMBE is a joint effort by NASA, the U.S. Navy, the National Oceanic and Atmospheric Administration and university partners to develop smoke aerosol forecasting models for the benefit for the global weather community. 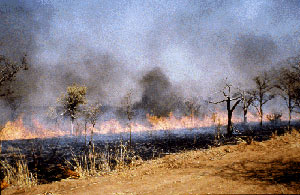 Image left: Biomass burning, including forest fires and the burning of fields in the tropics, is a large source of pollutants. Click image to enlarge. Credit: NASA

"Although this computer model is not currently used in air-quality and weather forecasting, it is superior to other models for this purpose because it explicitly accounts for the diurnal variation of smoke emission from biomass burning fires and the radiative impacts of aerosols so that their impact on meteorology can be studied," said study co-author Sundar Christopher of the University of Alabama, Huntsville, Ala.

Comparisons with ground-based observations and imagery from NASA's Moderate Resolution Imaging Spectroradiometer (MODIS) on the Terra and Aqua satellites showed that the model accurately simulated the impact of smoke on air temperature and the amount of sunlight absorbed and scattered through the atmosphere.

MODIS data was particularly useful in determining how aerosols from the Central American fires affected the amount of sunlight passing through the atmosphere, which can impact surface and atmospheric temperatures. "MODIS data allows us to capture the meteorological impacts of smoke and aerosols, especially important during the tropical dry season each spring when biomass burning peaks and pollutants are transported to the United States," said Christopher.

This work demonstrated a new capability to improve air quality and climate forecasts, but researchers need to learn more about how smoke and aerosols impact clouds. "New satellite data, including that from the joint NASA and French Cloud-Aerosol Lidar and Infrared Pathfinder Satellite Observation satellite, should help us better understand cloud microphysical processes and how aerosols impact cloud formation," said Christopher. Combining this information with improved computer models will help scientists better understand the role of smoke and aerosols on the climate to improve forecasts, even when the pollutant source is thousands of miles away.

This study was published on July 26, 2006 in the Journal of Geophysical Research-Atmospheres.