NASA Eyes Effects of a Giant 'Brown Cloud' Worldwide
NASA scientists recently announced that a giant, smoggy atmospheric "brown cloud" that forms over South Asia and Indian Ocean has intercontinental reach, and has effects around the world.

Image/animation above: A dense blanket of polluted air hovers over central eastern China. The 'Giant Brown Cloud' is an unhealthy mix of ozone, smoke, and other particles from human activities. Click on image to view animation. Credit: NASA/ORBIMAGE

The word "smog" was coined by blending the terms "smoke" and "fog." However, today smog means air pollution. Smog is a mix of particles and unhealthy gases including ozone that linger in the lower atmosphere, or the troposphere.

Scientists studied the intercontinental smog or ozone processes associated with the "brown cloud" using a new NASA technique to combine data acquired by satellites with ozone data measured by instruments on special weather balloons. The brown cloud is a persistent, but moving, air mass characterized by a mixed-particle haze, typically brown in color. It also contains other pollution, such as ozone.

Image/animation above: Ozone can be either good or bad depending on its location. "Good" ozone located in the stratosphere blocks harmful ultraviolet radiation from reaching us, while "bad" ozone in the lower atmosphere acts as a pollutant that degrades the quality of the air we breathe. Click on image to view animation. Credit: NASA

"The scientists found that both brown cloud pollution and natural processes could contribute to unhealthy levels of ozone in the lower atmosphere. Some ozone from the cloud rises to higher altitudes and spreads into the global atmosphere,” said Robert Chatfield, a scientist at NASA Ames Research Center in California’s Silicon Valley. "The ozone that comes out of the 'brown cloud' is related to it, but strictly speaking, the visible brown cloud is only the aerosol component of this smoggy stew," Chatfield explained.

"Ozone is a triple-threat player in the global environment. This form of oxygen can be good, bad or ugly. There are three very different ways that ozone affects our lives," Chatfield said. 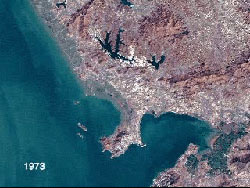 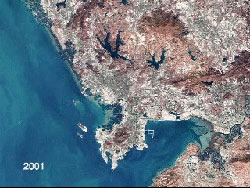 Images above: Urban in southern China increased by more than 300% between 1988 and 1996. NASA’s Landsat satellite obtained images of the region from 1973 to 2001. Population growth is one factor affecting the size of the "Giant Brown Cloud." Click on either image to view animation. Credit: NASA

In the upper atmosphere, or the stratosphere, ozone is very good, as it acts as a shield to protect life on Earth from harmful Ultraviolet sunlight. Near the Earth's surface, ozone or smog, can burn our lungs and damage crops.

The ozone-monitoring instrument on the NASA Aura satellite is providing new data about the 'brown cloud.' "The beautiful, high-detail images from this new instrument promise to help us sort out our major questions about how much of the tropospheric ozone is from pollution and how much is from natural factors," said Chatfield. 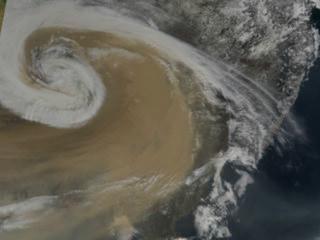 Image/animation above: Particles from airborne pollution, such as the "Giant Brown Cloud," can travel all around the globe. In April of 2001, NASA satellites saw a massive dust storm appear over China. The densest portion of the aerosol pollution traveled east over Japan, the Pacific Ocean, and, within a week, the United States. Click on image to view animation. Credit: NASA

This new study looks at ozone as a greenhouse gas, one that can warm the planet. "The ozone pollution we studied also adds to heating effects, which take place throughout the lower atmosphere," Chatfield stated. 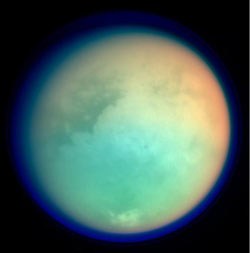 Image to right: Researchers are currently studying Saturn’s moon, Titan, to better understand the connections between atmospheric haze, winds, and sunlight. Comparing the atmospheres of Titan and Earth can shed light on basic smog processes on both worlds. Click on image to enlarge. Credit: NASA

Analysis shows that ozone in the lower atmosphere over the Indian Ocean comes from the intensely developed industrial-agricultural area in the region. The southern pollutant buildup has long-range effects, often traveling across Africa, far beyond the main brown cloud of particles.

Image/animation above: Aura, NASA's latest next generation Earth-observing satellite, will study ozone levels in our atmosphere with its Ozone Monitoring Instrument (OMI). This simulation shows the OMI hard at work. Click on image to view animation. For more information on the Aura project, please visit: http://www.nasa.gov/aura Credit: NASA

The ozone-monitoring instrument on the NASA Aura satellite is providing scientists with new data about the brown cloud. The high-detail images from the new instrument promise to help scientists address major questions that include 'what is pollution?' and 'what is natural?'"

To access technical information about the 'brown cloud' study on the Web, visit: Dr. Chatfield's Research on the Brown Cloud