Satellites See a Double-Texas Sized Loss In Arctic Sea Ice
Scientists using satellite data have confirmed that the amount of sea ice that floats in the chilly Arctic is much less than it used to be, and that's probably because of warmer Arctic temperatures.

Satellites helped scientists learn that there was about 502,000 square miles less sea ice each September since 2001 than there typically was in previous Septembers.

Satellites have flown over the Arctic and looked at sea ice since 1978. Some sea ice melts in the summertime every year, even in the Arctic, where temperatures are still near freezing. But in 2002, satellites showed that the springtime melting of sea ice started earlier than normal. 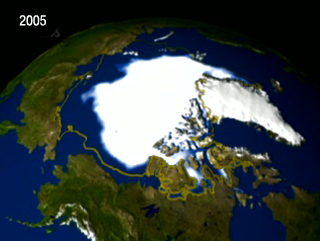 Right animation: The minimum concentration of Arctic sea ice in 2005 occurred on September 21, 2005, when the sea ice extent dropped to 2.05 million sq. miles, the lowest extent yet recorded in the satellite record. The yellow line represents the average location of the ice edge of the perennial sea ice cover for the years 1979 through 2004. Click on image to view animation.
Credit: NASA

On Sept. 21, 2005, sea ice extent dropped to 2.05 million sq. miles, the lowest extent yet recorded in the satellite record. 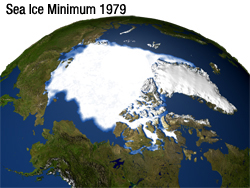 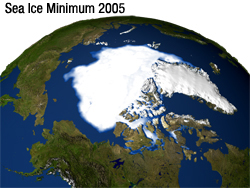 
"Even if sea ice retreated a lot one summer, it would make a comeback the following winter, since temperatures below freezing generally cause at least a thin layer of ice to form," explains Florence Fetterer, National Oceanic and Atmospheric Administration program manager at NSIDC. "But in the winter of 2004-2005, sea ice didn't approach the previous wintertime level." 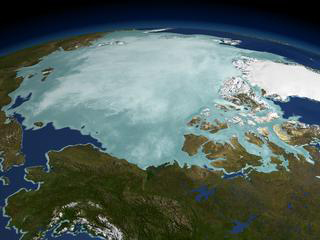 Left animation: Arctic sea ice typically reaches its minimum in September, at the end of the summer melt season, and then recover over the winter. The 2004-2005 winter-season showed a smaller recovery of sea ice extent than any previous winter in the satellite record, and the earliest onset of melt throughout the Arctic. This visualization shows seasonal fluctuations in Arctic sea ice derived from the new high resolution AMSR-E instrument on NASA's Aqua satellite. Click on image to view animation.
Credit: NASA

For the perennial ice to recover, sustained cooling is needed, especially during the summer period. This has not been the case over the last 20 years, as the satellite data show a warming trend in the Arctic, and it is not likely to be the case in the future, as climate models predict continued Arctic warming. Even if ice were to grow back in these areas, the new ice is often thinner and more susceptible to future melt, than the thick perennial ice that it replaces. 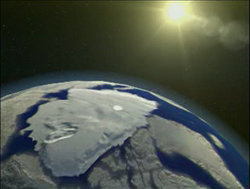 Right animation: Sea ice decline is likely to affect future temperatures in the region. Because of its light appearance, ice reflects much of the sun's radiation back into space whereas dark ocean water absorbs more of the sun's energy. As ice melts, more exposed ocean water changes the Earth's albedo, or fraction of energy reflected away from the planet. This leads to increased absorption of energy that further warms the planet in what is called ice-albedo feedback. Click on image to view animation.
Credit: NASA


Sea ice decline is likely to affect future temperatures in the region. Because of its white color, sea ice reflects much of the sun's radiation back toward outer space, whereas dark ocean water absorbs more of the sun's energy. As sea ice melts, more exposed ocean water changes how much of Earth's energy is reflected away from the planet.

There are many factors driving changes in the Arctic, and a longer record of data will help scientists better understand the remarkable changes they are now seeing.