Smoke Gets In Your Eyes: NASA Study Shows Global Impacts of Pollution
The first analysis of a key atmospheric pollutant obtained from the Atmospheric Infrared Sounder, or AIRS, instrument on NASA's Aqua satellite is shedding new light on how natural and human-produced pollutants can have wide-reaching effects on the health of our global village. The AIRS instrument has been making highly accurate measurements of air temperature, humidity, clouds, and surface temperature since 2002, but recently scientists have been able to gain valuable new information on key trace gases by taking advantage of AIRS large number of spectral channels. 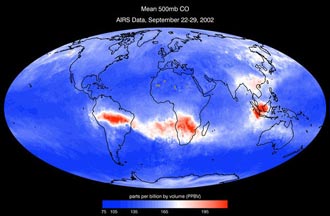 Scientists from NASA, the National Oceanic and Atmospheric Administration and the University of Maryland Baltimore County analyzed AIRS data on carbon monoxide levels in Earth's lower atmosphere, or troposphere, over eight days in September 2002. Carbon monoxide is a major precursor for the formation of tropospheric ozone, a very unhealthy pollutant. The results, published in the journal Geophysical Research Letters, demonstrate the promise AIRS holds over the course of its seven-year lifetime for helping scientists better understand how carbon monoxide is formed, transported globally and interacts with other chemicals to affect global air quality.

In collaboration with Professor Wallace McMillan at the University of Maryland Baltimore County and the Joint Center for Earth Systems Technology, as well as Dr. Chris Barnet at the National Oceanic and Atmospheric Administration's National Environmental Satellite, Data and Information Service, the scientists focused on a major South American fire event that took place September 22 to 29, 2002 as was detected from space by NASA's Moderate Resolution Imaging Spectroradiometer, or MODIS, instruments on NASA's Terra and Aqua spacecraft. While some of the individual fires occurring during the event were started by natural sources, the majority were caused by human-produced biomass burning, a commonplace land clearing practice during the dry season in the Southern Hemisphere every September and October. One result of these fires was the generation of a large plume of carbon monoxide that drifted across the Atlantic and Africa and reached as far as the southern Indian Ocean. Other Southern Hemisphere fires occurring at the same time in Africa and Borneo likely added to the CO plume. The AIRS CO data reveal a similar pattern of carbon monoxide global transport as had previously been detected during NASA's Transport and Atmospheric Chemistry near the Equator-Atlantic and Southern African Regional Science Initiative field experiments in 1992.

Meanwhile, in the Northern Hemisphere, AIRS detected elevated carbon monoxide values over central and eastern Siberia, the northern Pacific Ocean and along the coast of southeast Asia, that could be ascribed to biomass burning, long-range transport and industrial and domestic fuel sources, respectively. Enhanced carbon monoxide values in southern Siberia resulted from a large number of fires stretching into northern Mongolia. The subsequent AIRS daily maps tracked this carbon monoxide feature as it moved to the east, ending up off the west coast of northern North America. The sparse number of fires counted by MODIS over southeast Asia suggests the carbon monoxide plume stretching from there to the east across the Pacific Ocean originated from industrial and domestic biofuel sources.

"Never before have such detailed views of a tropospheric trace gas, other than water, been available on a daily basis," writes Dr. McMillan. "AIRS represents a significant evolutionary advance in satellite trace gas remote sensing. For the first time, we will be able to monitor the daily changes in the globe-encircling transport of biomass burning emissions heretofore seen only in computer models."

On a global basis, nearly 50 percent of carbon monoxide emissions originate from human-produced sources, with the remainder resulting from biomass burning and oxidation of naturally occurring volatile hydrocarbons, said Dr. McMillan. "Carbon monoxide levels can be viewed as indicative of the state of Earth's carbon cycle and global climate change," McMillan said. "In addition, carbon monoxide has a one- to three-month lifetime in the troposphere, making it an excellent way to track motions of the atmosphere and the variability of pollution sources. As a precursor for the formation of tropospheric ozone and smog, global carbon monoxide observations from AIRS and other NASA instruments are crucial for modeling tropospheric chemistry and assessing the overall health of our atmosphere."

For nearly a quarter century, NASA has used innovative Earth-orbiting instruments to glean new insights into air quality issues. The first global views of carbon monoxide came from the 1981 flight of NASA's Measurement of Atmospheric Pollution from Space, or MAPS, instrument aboard the Space Shuttle. That experiment, which was subsequently reflown aboard the Shuttle in 1984 and 1994, had a relatively small field of view and could only point directly down at the Earth below. As a result, it took a week or longer to produce a global carbon monoxide map. Currently, the Measurement Of Pollution In The Troposphere, or MOPITT, instrument on NASA's Terra satellite uses technology similar to that of MAPS to measure tropospheric carbon monoxide. While MOPITT has much greater spatial coverage per orbit than the earlier instrument, it still requires three to five days to produce a contiguous global map, so daily phenomena are missed.

AIRS represents a significant advancement in the state of the art. Launched May 4, 2002, the high-spectral resolution infrared instrument takes 3-D pictures of atmospheric temperatures, water vapor and trace gases. It is the first in a series of advanced infrared sounders that will provide accurate, detailed atmospheric temperature and moisture observations for weather and climate applications. Orbiting Earth at an altitude of 705 kilometers (438 miles), it views the atmosphere through nearly 2,400 different spectral channels and has a 13.5-kilometer (8.4-mile) Earth-pointing field of view. In addition to carbon monoxide, other key trace gases it monitors include carbon dioxide and methane.

With a similar sensitivity to mid-tropospheric carbon monoxide as the previous two instruments, AIRS' unique daily global view provides nearly 10 times as many retrievals per day as Mopitt and enables process studies of phenomena on daily timescales. Its 144,000 daily retrievals are used to create one-degree latitude, one-degree longitude grid maps that cover approximately 70 percent of the planet from 60 degrees north of the equator to 60 degrees south. 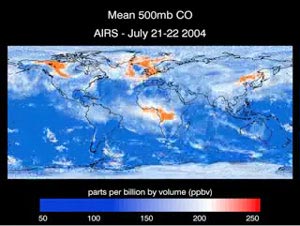 Animation right: This animation from AIRS data shows the transport of the carbon monoxide gas from the 2004 Alaska wildfires. The gas travels through the atmosphere across Canada, the United States and the Atlantic Ocean. Besides Alaska, the maps reveal high concentrations of CO originating in China and Russia which travel across the Pacific Ocean to the northwestern United States. Central Africa exhibits another large concentration of CO. These concentrations are also likely to indicate large scale forest burning. Animation credit: NASA/JPL
+ Play animation (Quicktime 1.25Mb)

The Tropospheric Emission Spectrometer (TES), NASA's latest addition to its suite of atmospheric monitoring tools, will measure carbon monoxide as well as many other trace gases, allowing scientists to see where or how far away air quality is influenced by biomass burning and for how long, according to JPL's Dr. Michael Gunson, deputy principal investigator for the instrument. TES data will complement that from AIRS by providing detailed information on the chemical processes regulating global air quality. For more information about the Atmospheric Infrared Sounder and Tropospheric Emission Spectrometer on the Internet, visit:

For more information on Dr. McMillan's research or to contact him directly: