Scientists Surf the Seas of Space to Catch an Atmospheric Wave
A study by NASA and university scientists is shedding new light on a mysterious, cyclical wave in Earth's atmosphere that at times profoundly affects our planet's weather and climate. 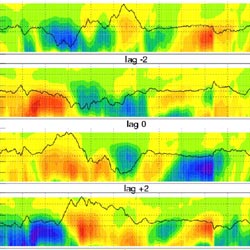 Image right: The eastward movement of the "dry" phase of the Madden-Julian Oscillation across the equatorial Indian and western Pacific Oceans is shown in these plots of atmospheric water vapor superimposed over rainfall data. Image credit: NASA/JPL
+ Browse version of image

Using satellite data from the Atmospheric Infrared Sounder (Airs) instrument on NASA's Aqua spacecraft, a research team led by Dr. Duane Waliser of NASA's Jet Propulsion Laboratory, Pasadena, Calif., and Dr. Baijun Tian of the California Institute of Technology, also in Pasadena,, set out to study the structure and evolution of the Madden-Julian Oscillation.

This slow, eastward-moving wave of clouds, rainfall and large-scale atmospheric circulation anomalies spans nearly half of Earth's equator, primarily over the Indian Ocean and western Pacific. Because it can strongly influence long-term weather patterns and has far-reaching global effects, scientists want to incorporate it more accurately in the general circulation models used by agencies around the world for weather prediction and climate forecasts.

Ebbing and flowing in cycles of about 40 to 50 days, the Madden-Julian Oscillation triggers showers and thunderstorms as it forces air to rise, and it inhibits clouds and rainfall in its subsiding phase. Its impacts are widespread. It triggers Asian and Australian monsoon wet and dry spells in the Indian and western Pacific oceans. It affects the winter jet stream and atmospheric circulation in the Pacific/North America region, causing anomalies that can lead to extreme rainfall events. It can also change summer rainfall patterns in Mexico and South America and may trigger variations in the El Nino climate phenomenon.

The Airs analysis revealed the oscillation results in an elegant interplay between rainy and clear conditions over the tropical Indian and western Pacific Oceans. Warm and moist conditions near the surface eventually give way to rainy and cloudy conditions aloft. These disturbed conditions are ultimately squelched by the introduction of dry, cool air near the surface, leading to clear skies. The rainy, clear and transitional periods in between them last 10 to 12 days each.

"Details such as these are critical for evaluating weather prediction models and improving our theoretical understanding of the oscillation phenomena," said Waliser. "Temperature and moisture data from sparse weather balloon readings and atmospheric models are simply not sufficient to properly represent many important features of the oscillation. Satellite-based observations such as those from Airs are therefore fundamental to gaining a fuller understanding of the processes at work."

Waliser said that until recently, modeling the wave's hydrological components such as water vapor and clouds, condensation and evaporation processes has been difficult. With the launch of Airs in 2002, however, scientists gained a far greater ability to examine the wave's structure in 3-D and study its evolution over space and time.

"The high-quality Airs water vapor and temperature profiles provide new information on the vertical structure of the Madden-Julian Oscillation," said Tian. "This new information allows us to study the meteorological components that make up the oscillation in a way never before possible."

Airs is a high-spectral resolution infrared instrument that gathers 3-D profiles of atmospheric temperatures, water vapor and trace gases. It is the first in a series of advanced infrared sounders that will provide accurate, detailed atmospheric temperature and moisture observations for weather and climate applications. It views the atmosphere through nearly 2,400 different spectral channels, collecting 144,000 data retrievals daily around the globe.

The Tropical Rainfall Measurement Mission monitors tropical rainfall. The mission is the first space-based platform that uses microwaves along with precipitation radar to probe through clouds to reveal their vertical structure and estimate how much rainfall they are producing. The data are invaluable in areas with no rain gauges, such as the open ocean.

Study results were presented this week at the American Meteorological Society 86th Annual Meeting in Atlanta.

For more information on the Web, visit: http://airs.jpl.nasa.gov/ or http://trmm.gsfc.nasa.gov/.

For information about NASA and agency programs on the Web, visit: http://www.nasa.gov/home/ .