Tiny Air Particles Change How Much Carbon Plants Absorb
It's amazing how interconnected our world really is. Tiny little particles floating in the air, like dust or soot, can impact big processes like our climate. 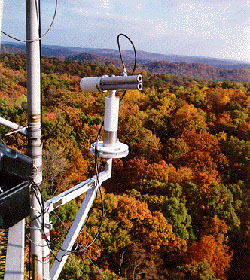 Now, a new NASA funded study has directly measured how these bits floating in the atmosphere, called aerosols, can affect the quality of sunlight that reaches Earth. As sunlight changes so does the amount of carbon that plants and ecosystems absorb from or release to the air. In a process called photosynthesis, plants use the Sun's energy to pull carbon dioxide (CO2) from the air, and use the carbon to build stems, roots and leaves. That's important, because in the atmosphere, carbon dioxide acts as a heat-trapping gas that warms the Earth.

The study took advantage of six sites around the country that represented a wide variety of landscapes, including forests, crops, and grasslands. These sites are fitted with state of the art equipment for measuring radiation amounts and the movement of carbon between the air and ecosystems on land. The researchers found that when aerosol levels were high, the amount of carbon absorbed by an ecosystem increased for forest and croplands, and decreased for grasslands.

Niyogi and colleagues also discovered that the effect of aerosols on the overall movement and sharing of carbon dioxide by ecosystems may be greater than the effects of clouds on these processes.

"We were very excited to find direct observational evidence that one variable, the amount of aerosols in the atmosphere, can have such a significant effect on something so complex as an ecosystem's carbon exchange," Niyogi said.

Image Above: Carbon Cycle and Plants: During photosynthesis, plants pull carbon dioxide (CO2) from the air, and with the Sun's energy, they use the carbon to make sugars for building stems, roots and leaves. Aerosols and clouds in the atmosphere scatter sunlight, which allows forest and cropland vegetation to absorb CO2 more efficiently. Special cells called stoma in leaves can open wider to let in more CO2 when they are not exposed to the harsh, drying effects of direct sunlight. Illustration courtesy P.J. Sellers et al, NASA Earth Observatory. Credit: NASA

The research is important for understanding climate change and the various factors that influence how much carbon gets transferred from the air into below-ground carbon "sinks," where carbon is stored in soils, for example.

For each site, the researchers studied carbon movements on cloudy and clear days, and when there were high and low levels of aerosols. They also recorded levels of sunlight that reached the Earth. They studied measurements taken during afternoons from June through August, the peak growing season months. The years that data were available varied for each site.

As mentioned earlier, the study reported that the affects of aerosols on overall carbon movement or "exchange" may be more significant than those caused by cloud cover. Cloud cover tended to reflect the Sun's radiation back out to space, reducing the overall amount of light to Earth's surface. As a result, less sunlight on plants caused less photosynthesis to occur.

Compared to clouds, aerosols did not dramatically cut the amount of radiation that reached Earth's surface. It turns out the little particles scatter sunlight, allowing it to reach Earth's surface while also making the light less concentrated.

This scattering of light exposes more leaves to sunlight throughout the entire plant. Under direct sunlight, the top layer of leaves gets the most light. These top leaves can get saturated with radiation, causing the rate of photosynthesis to reach a limit and even out. With diffuse or scattered light, more leaves below the canopy can participate in photosynthesis at higher rates, increasing the overall intake of carbon by a plant. 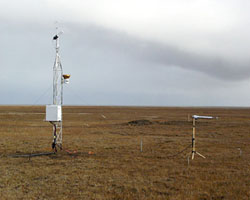 Image left: Grassland Research Site in Barrow, Alaska: This image shows one of six sites around the country where measurements for this study were taken. This micrometeorological tower associated with the Ameriflux network measures the exchanges of carbon dioxide (CO2), water vapor, and energy between this grassland ecosystem in Barrow, Alaska, and the atmosphere. Credit: Ameriflux

The way carbon moves in an ecosystem is affected by many factors, including surface temperatures. In dense vegetation with many leaves, like those found in both crops and forests, sunlight may play a larger role than higher temperatures. But in grasslands, the canopies, or leaf cover, are not as dense, causing the ground to heat more. With grasslands, temperature can play an equal or larger role in carbon exchange as radiation. When the ground heats, the soil gives off CO2, thus reducing the overall effect.

Earlier studies have also reported how aerosols alter the quality of light that reaches Earth, which can increase the rate that trees and crops absorb carbon dioxide from the air. These studies generally used mathematical computer models to show similar effects, or they have looked at how scattered light, called diffuse radiation, might impact plants. This study uses observations over various field sites to show a direct link between aerosols and carbon exchange on land.

The study appeared in a recent issue of Geophysical Research Letters.