Scientists Hunt for Acid Rain and Methane in Wetlands
Recently scientists from NASA and Open University in the United Kingdom set out to study how acid rain affects the methane gas that comes from wetlands in the U.S., England and Sweden.


Animation above: This movie from the U.S. Environmental Protection Agency highlights the science of acid rain, and its effects. Click arrow on bottom right to move to next image. Credit: U.S. EPA

Scientists went into natural wetlands because although most methane is produced by human activities, a large amount actually comes from natural wetlands. The concern with methane is that it's a greenhouse gas that contributes to warming our planet.

The researchers discovered that low levels of sulfate, which is in acid rain, actually block some bacteria found in wetlands from producing methane. 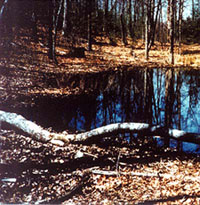 Dr. Vincent Gauci of Open University, United Kingdom, lead author of the study, said "We wouldn't want to give the impression that acid rain is a good thing - it has long been known that acid rain damages natural ecosystems such as forests, grasslands, rivers and lakes. But our findings suggest that small amounts of pollution may also have a positive effect in blocking this important greenhouse gas."

In the wetland study areas, scientists applied several quantities of sulfate, similar to the amounts found in acid rain. The results, acquired over several years, showed that low doses of sulfate reduced methane emissions by 30 to 40 percent. 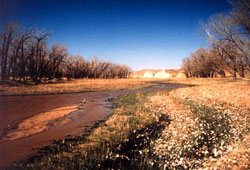 Image to left: Coastal wetlands in the United States, as their name suggests, are found along the Atlantic, Pacific, Alaskan, and Gulf coasts. They are closely linked to our nation's estuaries, where sea water mixes with fresh water to form an environment of varying salinities. The salt water and the fluctuating water levels (due to tidal action) combine to create a rather difficult environment for most plants. Credit: U.S. EPA Region 8/Paul McIver

What determines how much methane is produced in wetlands? The answer lies under the microscope. Carbon, heat and moisture are known to influence methane production by single-celled bacteria called Archaea. Under normal conditions, these bacteria "eat" carbon in the soil for energy and release methane as a byproduct. But, many types of bacteria thrive in the wetland environment. When sulfate from acid rain is in wetlands, another type of bacteria that reduce sulfates can out-compete the Archaea, and help limit the amount of methane they produce.

Wetlands may produce as much as 320 million tons of methane annually but only about half of that, or 160 million tons, gets into the atmosphere. The other 160 million tons never makes it. That's because it is destroyed when it mixes with oxygen as it moves through the soils from wet to dry and up to the surface. Despite the destruction of about half the methane produced, natural wetlands remain the single largest source of methane emissions, accounting for about one third of the global annual total from the Earth.

Image to right: Wetlands are among the most productive ecosystems in the world, comparable to rain forests and coral reefs. An immense variety of species of microbes, plants, insects, amphibians, reptiles, birds, fish, and mammals can be part of a wetland ecosystem. Physical and chemical features such as climate, landscape shape (topology), geology, and the movement and abundance of water help to determine the plants and animals that inhabit each wetland. The complex, dynamic relationships among the organisms inhabiting the wetland environment are referred to as food webs. Credit: U.S. EPA/ Mark Sharp

"It's a complicated problem because many factors from microscopic to global scales interact in these processes," said Elaine Matthews, a scientist at NASA's Goddard Institute for Space Studies (GISS), New York, and co-author of the study. The maximum emission of methane from wetlands occurs when conditions are warm and wet, while the biggest reduction in methane is achieved when the location of wetlands, sulfates in acid rain, high temperatures and substantial precipitation all come together.

"When we used all the field data with the NASA computer models and applied it to a global scale, it shows that the effect of acid rain from 1960 to 2030 actually reduces methane emissions to below pre-industrial levels," said Gauci. The effect more than compensates for the increase in methane emission that would be expected as wetlands become warmer. In this way, acid rain acts like a temporary lid on the largest methane source. However, experts expect methane emissions to increase over the entire 21st century in response to climate change.