An Uncertain Future
Scientists agree that a sudden shift in our climate that occurs over a few days is unrealistic. The Earth's oceans play a major role in climate evolution and "Changing the ocean's structure is harder than the atmosphere, because the ocean has a very high heat capacity and it takes a long time to cool or warm," says Schmidt.

A more realistic scenario might include regional disruptions in climate, spanning over decades not days, such as a transition to colder European winters. But, even these changes can wreak havoc. In recent years, we've seen how unusual precipitation patterns can drastically impact populations. And, scientists say phenomena like El Nino may be fueled and intensified by climate change. 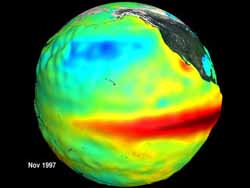 Today, there are several satellites keeping an all-weather watch on ice cover in the Arctic. NASA's Aqua satellite, for instance, carries a special sensor that can penetrate clouds and offers around-the-clock surveillance of ice with incredibly detailed images.

NASA and National Oceanic and Atmospheric Administration (NOAA) satellites are also monitoring other important pieces of the puzzle, like rainfall, sea-surface temperatures, and oceanic winds. Looking at these variables together can help scientists assess the possibility of change in our ocean's currents.

More research of clouds is vital to understanding our future climate, say scientists. "A changing climate could either produce more clouds that offset the effect of greenhouse gases, or it might increase cirrus clouds that warm the Earth by trapping heat at the surface," said Adamec. Present computer models do not handle clouds well, further complicating research. "Ongoing and future research to understand how the Earth's water cycle is changing is yet another area that deserves considerable attention," said NASA research meteorologist Marshall Shepherd.

One thing is for certain: the climate system is extremely complex, and many questions remain. Current computer climate models offer a "best guess" as to how scientists believe different climate processes interact. A major hurdle is the uncertainty associated with the models. "Since we don't know what industry and agriculture and transport is going to be like in 2100, the uncertainty will not be much reduced even if we had perfect climate models," said Schmidt.

Inevitably, the discussion turns to people, and the role of human industry in our climate. A few scientists say the changes we are seeing, such as those in the Arctic, are consistent with large, slow natural cycles in ocean behavior. But many scientists believe there is a greater human component that is also impacting climate. "There is no disputing that if you put more energy absorbing gases into the atmosphere, it will get warmer," said NASA research climatologist Waleed Abdalati. "The question is, how significant are these greenhouse gases against the backdrop of larger climate changes, and how 'self-correcting' will the Earth system be to these changes." Researchers hope that future climate models and longer datasets will provide clearer answers to such questions.

Back: The Prospect of Sudden Climate Change