NASA Spots Airborne Pollution Train
Thanks to winds high in the atmosphere, NASA scientists say dust and pollutants can quickly travel thousands of miles along a nearly uniform trail, much like a train racing down a track.

As air rolls along this track, or wind current, it picks up more smog and dirt from air peppered with thunderstorms that help bring the pollutants miles above the Earth's surface. This finding has helped researchers better understand how high levels of ozone occur off the west coast of Africa, far from known air pollution sources.

Tracing the Origins of Dirty Air

Scientists have long recognized that high levels of ozone in the South Atlantic are caused by lightning in nearby continents and by burning vegetation in parts of North Africa. But, these sources alone did not seem to entirely account for observed seasonal episodes of extreme ozone levels. 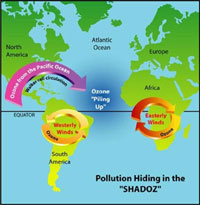 Ozone sensors, or ozonesondes, on balloons in the Southern Hemisphere Additional Ozonesondes (SHADOZ) network, confirmed the movement of smog in the tropical troposphere, the atmospheric layer between the surface and 50,000 feet. Finally, a computer model helped trace the track of the ozone train to discover its departure point. Putting all of the data pieces together, the puzzle was solved. The pollutants originated all the way from the Indian Ocean!

Chatfield and Thompson believe man-made pollutants from Asia flows southward, gets trapped in clouds, and then moves rapidly westward across Africa and the Atlantic, reaching as far as Brazil. During the periods of high ozone in the South Atlantic, especially during late winter, pollution from the Indian Ocean follows a similar westward track, hurried along by winds in the upper air, leading to a pollution "pile-up" in the South Atlantic, making the ozone even thicker.

The wind current that ushers the pollutants to such a repetitive destination is caused by the Intertropical Convergence Zone (ITCZ), an area of cloudiness and thunderstorms that forms where the northeast trade winds meet the southeast trade winds near the earth's equator. Acting like cogs in a wheel, the converging winds mix the lower level ozone and other pollutants from north to south.

Scientists began intensely studying South Atlantic ozone levels in 1998. Since then, nearly 2000 ozonesondes have been launched over the tropics. Before SHADOZ, ozone launches were often inconsistent and the data they provided was sometimes difficult to obtain. SHADOZ helped increase the number of sensors and led to better collection and sharing of data between NASA and its partners, including the National Oceanic and Atmospheric Administration (NOAA) and 10 tropical countries.

SHADOZ has also been helpful for meteorologists studying the climate of the tropics and to those that work on improving satellite sensors. The ozone data has shown that the tropical tropopause - the border between the stratosphere and troposphere - is a 2-mile thick transition layer, not a sharp boundary as scientists previously thought. Before SHADOZ, satellites were the only way to get this information, and there was no way to verify it. SHADOZ data is also used to improve satellite instruments by comparing their readings to those taken from the ground up.

For more information on this research, please visit: