Moody Pacific Unleashes Another Climate Mystery
While listening to your local weatherman during the past several years, you've probably heard the terms "El Nino" and "La Nina" hundreds of times, both major players in our weather. El Nino marks a warming of the waters in the tropical Pacific, every 3 to 7 years, that touches off a set of weather consequences, often including heavy rains and flooding across the western and southern United States. La Nina is best characterized as El Nino's opposite, a condition in which sea-surface temperatures in the eastern tropical Pacific are lower than normal, creating its own unique train of atmospheric events.

But, there are many other things going on in Earth's oceans that affect our weather. One is the Pacific Decadal Oscillation (PDO), first coined by researchers at the University of Washington in 1996 and now described as a long-lived El Nino-like pattern of Pacific climate variability, because both have similar climate fingerprints. But, the PDO can last a great deal longer, 20 to 70 years, unlike El Nino or La Nina that typically persist less than 18 months. Also, while sea temperatures change most dramatically near the equator during El Nino or La Nina, the most drastic changes are typically seen in the North Pacific with the PDO.

These shifts in location of cold and warm water in the Pacific alter the path of the jet stream, the conveyor belt for storms across the continent. Changes in the jet stream result in considerable, long-term changes in weather patterns.

Recently, unusual atmospheric conditions, not consistent with the PDO or other phenomenon, have been observed in the North Pacific, leading some scientists to believe the ocean's full fury is still being underestimated, as it might possess another "climate-controller" in its arsenal.

Another 'Mood' for the Pacific?

Previous research has suggested that temperature and pressure changes in the North Pacific and the resultant impact on the western U.S. climate could be explained simply by a "shift" in PDO phase. Like El Nino or La Nina, the PDO comes in two distinct flavors. During the warm (positive) PDO phase, the waters in the central North Pacific are cool, and those along West Coast of North America are warm. The opposite is true with the cool (negative) phase.

During the last four winters, ocean temperatures were cooler than normal along the U.S. West Coast and warmer than normal in the Gulf of Alaska. Very low sea level pressure was also observed in the Bering Sea with high pressure north of Hawaii. Sea level pressure is the weight of the air pressing down at sea level, and is on average, 14.7 pounds per square inch.

These conditions differ from those seen with the PDO, according to Nicholas Bond of the National Oceanic and Atmospheric Administration (NOAA), evidence the sea might still be holding many clues about other factors that drive the North Pacific climate and ultimately much of North America.

Bond's study also found that while some recently observed changes in North American climate might be explained by a phase shift in the PDO, others can not, including relatively mild temperatures across Western Canada and Alaska.

This research raises red flags about what controls the climate of the North Pacific and adjacent land areas, but there is little doubt that many climate changes felt across North America are caused by temperature swings in Pacific Ocean currents. Like ripples in a stream, these fluctuations create new or unusual wave patterns in the atmosphere that help shape climate

While the PDO is a longer-term natural oscillation going on in the Pacific, its flip from warm to cool provides a new background on which smaller events like El Nino and La Nino occur.

The PDO can combine with El Nino or La Nina conditions in certain ways to affect temperature and precipitation in the West, particularly during the winter. For instance, the warm or positive phase of the PDO can enhance an El Nino episode, amplifying the effects of this warm pool of water on the western U.S. This pattern predominated from the mid-1970s through at least the late 1990s and was a period of more frequent and stronger editions of El Nino. Similarly, during a negative phase of the PDO, La Nina conditions are more likely.

Questions as Vast as the Ocean 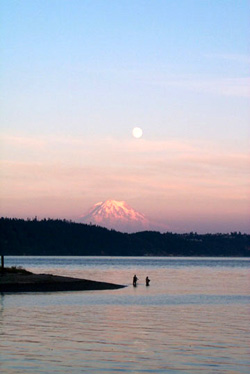 Despite the gains made in understanding the traits and consequences of the PDO, considerable work remains. Although it's a truly powerful climate engine, weather forecasters and others are still trying to determine to what extent PDO conditions can be predicted years in advance and how this can improve long-range forecasting, especially for the West Coast.

Image to left: The change throughout the last 5 years in the North Pacific climate created favorable ocean conditions for salmon and allowed them to return in greater numbers and reproduce more. This is a picture of Gig Harbor, Washington state, taken in 2000.

One major hurdle is that most data comes from temperatures below the sea surface. The goal is to get a three-dimensional picture of the PDO that might help scientists create a realistic computer model linking the ocean and the atmosphere, that will help better predict the Earth's climate.

Without doubt, a PDO prediction system would be of great benefit to society by allowing long-term planning in such areas as water supplies, energy production, and agriculture. "Shifts in the PDO are long-term tendencies, which actually have bigger economic impact than El Nino, said Bill Patzert, of NASA's Jet Propulsion Laboratory. "People talk about floods from El Nino, but what really has a harsh and costly impact is a five-year drought." Greater understanding of the PDO may also be useful for explaining future regional climate swings and that "normal" climate conditions can vary over time periods comparable to the length of a human's lifetime.

Beyond the direct impact on our weather, evidence also suggests that marine ecosystems are influenced by changes in marine climate, including the PDO. But here too, there are questions. During the past five years, salmon populations increased off the Pacific Northwest and in Alaska. Under classic PDO scenarios, including during its distinct negative phase from 1947 to 1976, Alaska's stocks would become depleted. This inconsistency may offer more evidence that researchers are still missing a piece of the climate puzzle.