In mid-September 2002, soot, smoke, and gases from regional power plants piled up in the air over the industrial Midwest and didn’t budge for several days. The Environmental Protection Agency’s air quality index values began to exceed 100—a level considered unhealthy for people with lung or heart conditions. 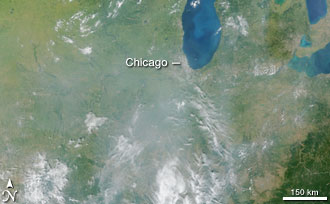 Image Left: Humid, hot, stagnant air combined with industrial emissions in the upper Midwest to create a thick blanket of haze over the area in September 2002. Weather sytems pushed the pollution around the eastern half of the country for a week, triggering air quality alerts as far away as Texas and South Carolina. This image from the Moderate Resolution Imaging Spectroradiometer (MODIS) shows the polluted air over the region on September 9, 2002. (Credit NASA/Earth Observatory)

Hurricane Gustav in the Atlantic Ocean blocked the pollution’s eastern escape route, so it flowed down the Mississippi Valley, only to find the exit to the Gulf of Mexico blocked by Tropical Storm Hanna. Air quality in parts of Texas remained unhealthy for several days. When Hanna came ashore, it pushed the air pollution back to the north. After a week on the road, the polluted air was almost back where it started!

Aside from being an interesting example of how complex our weather is, what’s so important about this story? To air quality scientist Jim Szykman, who works for the Environmental Protection Agency (EPA), what’s important is that most air quality forecasters where the pollution ended up didn’t even know it was coming. That’s a situation he is determined to change.

In an effort to predict the movement of particle pollution from one region of the country to another, the EPA has partnered with NASA and the National Oceanic and Atmospheric Administration (NOAA) to develop a pollution forecasting system called “IDEA,” for Infusing satellite Data into Environmental Applications.

The forecasts rely on atmospheric observations from the Moderate Resolution Imaging Spectroradiometer (MODIS) on NASA’s Terra satellite, air quality data from EPA monitoring stations, and weather forecasts and information from NOAA. The end result is a 48-hour forecast map of where the pollution is likely to spread. The team distributes the information to local forecasters and the public via a Website at the Cooperative Institute for Meteorological Satellite Studies (CIMSS) at the University of Wisconsin.

The project was conceived and planned by Szykman, along with Jack Fishman and Doreen Neil, researchers at NASA’s Langley Research Center. According to Szykman, the collaboration is just a step ahead of a shift in the nation’s data needs for air quality management, away from strictly local forecasts to regional ones. Regional forecasts are needed to address problems like the haze from Denver that frequently ends up in Rocky Mountain National Park.

The foundation of regional haze is tiny particles (aerosols) spewed by the trillions out of power plants, automobiles, fireplaces, and forest fires. The EPA calls pollution caused by aerosols “particle pollution.” Particles smaller than 2.5 micrometers (2.5 millionths of a meter) are especially dangerous to public health because the smaller the size, the easier it is for the particles to get into the lungs. 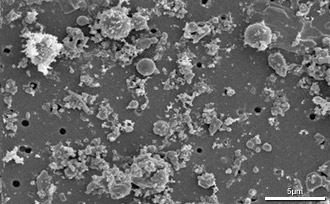 Image Left: This image shows a magnified view of aerosol particles collected in the industrial city of Port Talbot, England. Many of the particles measure roughly 2.5 microns across, small enough to easily enter and damage human lungs. (Micrograph courtesy MRC Institute for Environment and Health)

The need to monitor tiny particles over a wide region is a major change for air quality monitoring, according to Szykman. Air quality sensors in North America are located primarily in urban areas, and forecasts focus on atmospheric processes near Earth’s surface and urban-scale models of pollution transport. This approach works for predicting whether joggers in Atlanta should consider taking their daily run on an indoor treadmill, but not as well for events like the one in September 2002.

That is where NASA comes in. NASA scientists have created regional—and global—scale models of how the atmosphere moves particles around, and they also have satellites that observe particles in the air on global scales. According to Szykman, fusing detailed local pollution measurements with a space-based view of the atmosphere is the future of air quality forecasting, including ozone and carbon monoxide. 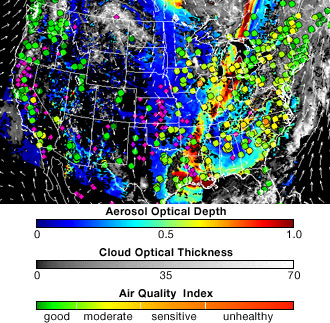 Image Left: EPA and NASA scientists fuse ground-based measurements with satellite data, meteorological measurements, and computer models to get a big-picture view of air pollution. This data fusion produces a map with several layers of information. The background is satellite data from MODIS, with aerosol optical depth in color (aerosol concentrations increasing from blue to red) and cloud thickness in shades of gray (thickness increasing from gray to white). Wind speed and direction are shown with white arrows, and ground-based measurements of air quality appear as colored dots (air pollution increasing from green to red). Fire locations from the GOES-12 satellite are marked with pink or violet diamonds. The image shows conditions on July 19, 2004. (Credit: NASA/EPA/NOAA/CIMSS IDEA program)

“Each year the federal government spends a significant amount of public funds on scientific research, and it is an obligation of the different federal agencies to work together on the use of such research for the public benefit. I believe IDEA is a good demonstration of that,” he says. Also, says Szykman, “The other people involved with this project at both the EPA and NASA are passionate about their work. It’s nice to work with a group of people who feel they have something to contribute to either science or society in some small, but meaningful way.”

This article was excerpted from A New IDEA in Air Quality Monitoring on NASA's Earth Observatory.

By Rebecca Lindsey, NASA Earth Observatory
› Back To Top