Recipe for a Hurricane

Between June 1st and November 30th and peaking between late August and mid-September, the Atlantic Ocean becomes a meteorological mixing bowl, with all of the ingredients necessary to create the recipe for hurricanes. And when it does, NASA has a cadre of satellites ready to serve up a feast of information to the forecasters who seek to monitor and better understand these awesome storms.

NASA satellites are critical in helping forecasters determine if all of the ingredients are coming together to make a hurricane, and if so, how strong the hurricane may be, and who in coastal communities and at sea will be at risk. NASA satellites improve hurricane forecasts using space-based observations, data assimilation, and computer climate modeling. NASA-sponsored measurements and modeling of global sea surface temperature, precipitation, winds and sea surface height have also improved our understanding of El Nino and La Nina events, which tend to enhance and suppress Atlantic and Gulf hurricane development, respectively.

Thirty years ago, meteorologists were unable to see the factors in hurricane formation and could only spot a hurricane with still pictures from the TIROS-N satellite. Over the past 10 years, visible and infrared satellite sensors were still the workhorses for monitoring hurricanes. Now, multiple NASA satellites exploit everything from radar pulses to microwaves to enhance forecasts, providing data to researchers several times a day.

Sea surface temperatures must be 82 degrees Fahrenheit (F) or warmer for tropical cyclone formation and sustenance. The Aqua satellite's Advanced Microwave Scanning Radiometer (AMSR-E) and the Tropical Rainfall Measuring Mission (TRMM) Microwave Imager can detect sea surface temperatures (SST) through clouds, which is valuable information in determining the direction a tropical cyclone is moving and whether it may strengthen or weaken. Traditional satellite measurements of SST use infrared instruments and are limited to cloud-free regions. The Jason-1 satellite altimeter provides data on sea surface height, a key measurement of ocean energy available to encourage and sustain hurricanes.

Images to left: Orange and red indicate the necessary 82-degree and warmer sea surface temperatures (SSTs) needed. The data for this image was collected by the Advanced Microwave Scanning Radiometer-EOS (AMSR/E) aboard the Aqua satellite from May 2002. Click images to see animation

Next, add a disturbance, seen in right image, generally easterly waves off of Africa, formed from winds resulting from the clash between the hot Sahara Desert and the cooler Gulf of Guinea. These waves provide the initial energy and spin required for a hurricane to develop, as imaged by the Geostationary Operational Environmental Satellite (GOES, operated by NOAA) on Sept. 1-15, 2001.

Another necessary ingredient is rotating winds over the ocean's surface. These winds are a precursor to tropical cyclone development and the SeaWinds instruments aboard Japan's Midori 2 and NASA's QuikSCAT satellites can detect these winds before other instruments, providing even earlier notice of developing storms to forecasters and scientists.

With the right mix of winds and SSTs, an ordinary cluster of tropical thunderstorms can explode into a tropical storm. Winds converge, forming the familiar circular pattern of clouds. Warm, rising air in the storms draws water vapor up from the ocean. The vapor condenses in clouds and releases heat, warming the eye, evaporating more surface water and feeding the hurricane's heat engine, continuing the cycle.

Hurricanes essentially act as engines, drawing energy up from warm tropical ocean waters to power the intense winds, powerful thunderstorms, and immense ocean surges. Water vapor from the warm ocean surface evaporates, forming towering convective clouds that surround the eyewall and rainband regions of the storm. As the water vapor cools and condenses from a gas back to a liquid state it releases latent heat. The released heat warms the surrounding air, making it lighter and promoting more clouds. Because the hurricane-speed winds surrounding the clear eye are often absent from the center of a hurricane, the heaviest rain clouds are pushed out to form a ring around the center, leaving a relatively fair-weather eye.

By synthesizing data from multiple instruments and satellites, scientists get a full picture of the many ingredients of a hurricane. Click image to see animation of hurricane model. Credit: NASDA/NASA

Once a storm develops, TRMM provides an inside view of how organized and tightly spiraled rainbands are, key indicators of storm intensity.

TRMM covers the global tropics and doesn't rely on a tropical disturbance being close to land to determine its intensity from hurricane hunter flights through it. TRMM provides tropical cyclone intensity information from the safe distance of space. For this reason the Hurricane Center and the Department of Defense's Joint Typhoon Warning Center often rely on TRMM, QuikSCAT and other NASA satellites for early assessment of young storms in the open ocean.

The hurricane monitoring capabilities enabled by these satellites are funded by NASA's Earth Science Enterprise (ESE), whose mission is to protect and understand our home planet by enabling improved prediction capability for climate, weather, and natural hazards

The Atmospheric Infrared Sounder (AIRS) aboard NASA's Aqua satellite, furnishes three-dimensional views of temperature, humidity and clouds in the atmosphere. AIRS observes the temperatures of cloud tops via infrared energy, and, with the help of a pair of companion microwave-energy sensors, maps temperature and humidity inside and below clouds. This shows scientists a storm's inner structure, including its most intense regions. A high-resolution visible wavelength sensor adds information about the clouds' fine structure. With AIRS, these observations come simultaneously from a single satellite, while previously scientists coordinated observations taken hours apart from several satellites 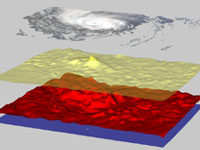 The Atmospheric Infrared Sounder experiment on NASA's Aqua spacecraft reveals important new information to supplement the familiar overhead views of hurricanes (called typhoons in the Western Pacific) that come from satellites. Here AIRS shows some of the internal temperature structure of Supertyphoon Pongsona just as it hit the island of Guam on December 8, 2002. Click image to see more information and animation about this image.