Satellite Thermometers Show Earth Has a Fever
Turns out moms and dads aren't the only ones whom rely on thermometers to test for a "fever" ...scientists do too! Thanks to satellite technology, climate researchers now have more evidence that our planet has experienced abnormal warmth for at least two decades.

Recognizing previous climate studies relied on temperature data from the relatively few observing stations around the globe, Menglin Jin -- visiting scientist at NASA's Goddard Space Flight Center -- set out to use satellite-based data for a more complete and detailed representation of the Earth's temperatures.

Satellite Data Fills in the Gaps

Satellites were used to develop an 18-year record (1981-1998) of global land surface temperatures. The data showed that the Earth's snow-free land surfaces, on average, warmed during the period. The findings are in a NASA study published in a recent issue of the Bulletin of the American Meteorological Society.

Unlike scattered ground-based weather observing stations that measure the temperature two to three meters above land, satellites measure ground surface temperature, or skin temperature, that is essential in assessing regional and global climate change. Other supplementary satellite measurements, such as land cover, cloud, precipitation and sea surface temperatures can then be used to give scientists many of the tools they need to determine the causes of land surface warming.

A Wealth of Data

The 18-year Pathfinder data in the study showed that average global temperatures increased 0.43 Celsius (C) or 0.77 Fahrenheit (F) per decade, while ground station data indicated a rise of 0.34 C (0.61 F). A re-analysis of skin temperature data completed by the National Center for Environmental Prediction (NCEP) showed a similar trend, with temperatures rising 0.28 C (0.50 F) per decade.

Not surprisingly, however, the research did find variations at the regional level. "While many regions were warming, central continental regions in North America and Asia were actually cooling," Jin said. 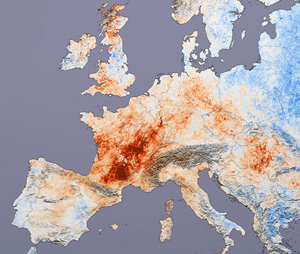 Although this technology can't detect surface temperatures over snow, it can see the extent of snow coverage and its variations in mountainous areas that are typically hard to monitor. The study also corrected any skewed skin temperature data created by cloud cover, aerosols, volcanic eruptions, and extreme climate events, such as El Nino.

While limited to a few years, skin temperature measurement data are extremely useful since they are improvements on existing data. Such satellite-based measurements are also necessary in improving climate analyses and computer models. Consistency with other research and technology, including TOVS, its global coverage, and easy data access suggest skin temperature observations will continue to be valuable in future climate change studies.