NASA Plans to Put an Aura Around the Earth
When people search for conditions that might support life on other planets, one of the first things they look for is water. Right now, NASA is searching for signs of water on Mars as a precursor to whether life may have been possible there. But the thin sliver of gases and air that make an atmosphere around a planet is just as necessary for life to exist.

Image above: Artist's rendition of the Aura satellite. Credit: NASA

The atmosphere traps air around our planet, making it possible to breathe and to have a climate. It also regulates the temperature within a range that allows life to exist, and our ozone layer blocks life-threatening ultraviolet radiation from the sun from reaching earth's surface.

Earth's atmosphere sustains life in all these ways, and by the thinnest margins. If a person could cruise at a speed of 60 miles an hour straight up, it would take just 6 minutes to exit the air we need to survive. Considering the relatively delicacy of this thin protective film, understanding our atmosphere goes hand in hand with protecting life as we know it.

On June 19, NASA will launch Aura, a next generation Earth-observing satellite that will make global observations of the ocean of air that surrounds our planet. Aura will supply the best information yet about the health of Earth's atmosphere.

Aura will provide an essential component for understanding changes in our climate, our air quality, and the ozone layer that protects life from harmful solar radiation. In doing so, it will help answer some fundamental questions regarding climate change. One question that researchers have asked is: Is the stratospheric ozone layer is recovering? International agreements, like the Montreal Protocol, have banned ozone destroying chemicals like Chlorofluorocarbons (CFCs), but scientists are unclear about the effectiveness of these treaties. Aura will accurately detect global levels of CFCs, and their byproducts, chlorine and bromine, which destroy the ozone layer.

Another question that researchers need more information to: What are the processes controlling air quality? Aura will help greatly to unravel some of these mysteries by tracking the sources and processes controlling global and regional air quality. When ozone exists in the lower atmosphere, the troposphere, it acts as an air pollutant. Gasoline and diesel engines give off gases in the summer that create ozone and smog. Aura will help scientists follow the sources of ozone and its precursors. 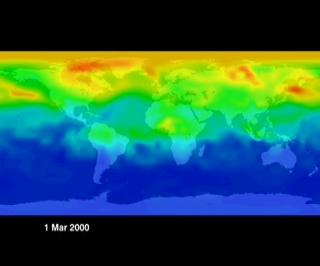 Image Above: Global map of carbon monoxide. Red represents the highest concetrations. Click image to see annimation of the movement of Carbon monoxide around the world. Credit:NASA

Finally, Aura will offer insights into the question: How is the Earth's climate changing? As the composition of Earth's atmosphere changes, so does its ability to absorb, reflect and retain solar energy. Greenhouse gases, including water vapor, trap heat in the atmosphere. Airborne aerosols from human and natural sources absorb or reflect solar energy based on color, shape, size, and substance. The impact of aerosols, tropospheric ozone and upper tropospheric water vapor on Earth's climate remains largely un-quantified, but now Aura will have the unique ability to monitor these agents.

Understanding Earth to Look Beyond

By studying the atmosphere and its chemistry, Aura will complete the first series of NASA's Earth Observing System satellites. The other satellites are, Terra, which monitors land, and Aqua, which observes Earth's water cycle. The trio of satellites rounds out this coordinated effort to get a complete and detailed picture of factors that contribute to our dynamic climate system. Along with these other satellites, Aura will create an essential stepping stone to better understanding planets other than Earth as well. The mission will be on the cutting edge of the agency's legacy of ground-breaking exploration.

"Gaining this global view of Earth will certainly reap new scientific discoveries that will serve as essential stepping stones to our further exploration of the Moon, Mars and beyond, the basis of the Vision for Space Exploration," NASA Administrator Sean O'Keefe said.

With the Aura mission, NASA will cap off a 15-year international effort to establish the world's most comprehensive Earth Observing System, whose overarching goal is to determine the extent, causes, and regional consequences of global change. The data from this satellite is expected to help organizations across the country better forecast air quality, ozone layer recovery, and climate changes that impact our health, our economy, and our environment.

Related Links NASA PLANS TO PUT AN AURA AROUND THE EARTH