The Hidden Life of Thunderstorms
Scientists are sending unmanned aircraft into electrical storms to learn more about their mysterious inner workings.

There's much more to a thunderstorm than meets the eye. Literally. If you could see the invisible force fields around magnets and clothes that have "static cling," a storm on the horizon would look very different.

Engulfing and dwarfing the storm clouds, ghostly ribbons of huge magnetic and electric fields would arch high above the thunder clouds to the top of the atmosphere, and would sprawl downward from the clouds like tendrils groping the landscape. These invisible fields are always in motion, swelling and contorting as the storm clouds churn, lurching suddenly as lightning bolts strike.

Scientists have long assumed that this mostly hidden side of thunderstorms serves as the electrical "pump" that maintains a huge difference in charge between the earth's surface and an upper layer of the atmosphere called the ionosphere. There's a voltage drop between the two, measuring somewhere between 150,000 and 600,000 volts. Left to itself, this difference should naturally balance out in about 15 minutes, but it doesn't.

So a pump must exist. Unfortunately, the numbers don't add up. Scientists are still trying to figure it out: All the cloud-to-ground lightning strikes occurring over the whole planet--about 15 strikes per second--don't move enough electric current to maintain the charge difference seen. Something else must be happening.

"There are other sources besides lightning, and that's part of what we're trying to get a handle on," says Richard Blakeslee, a scientist at the Global Hydrology and Climate Center at NASA's Marshall Space Flight Center. 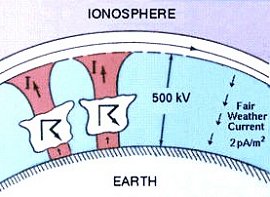 He explains: "The earth and its atmosphere are like a giant electric circuit. In fair weather, the charge difference between the ionosphere and the ground drives a steady trickle of current from the atmosphere to the ground, despite the fact that air is a poor conductor of electricity."

"So something must drive a current back from the earth up into the atmosphere to complete the loop and keep the circuit flowing--namely thunderstorms. The two flows should be equal, but so far we still haven't 'balanced the budget'."

To take a closer look at what's happening, Blakeslee and colleagues have used a novel way of monitoring thunderstorms. They flew a modified version of the Predator unmanned aerial vehicle (UAV) used in the recent Iraq War, "conscripting" a version of the aircraft into civilian duty to fly over thunderstorms near Key West, Florida.

Their high-altitude version of the UAV, called the Altus II, can measure the invisible electric and magnetic fields enveloping the storm. As the UAV flies over the storm clouds, it passes through these fields, sensing the strength and direction of the fields at points along its flight path.

Combined with optical measurements of lightning flashes, the result is a much more complete picture of the electrical infrastructure of thunderstorms. 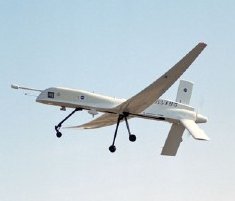 "One of the things we can measure with this experiment is the current flowing above a thunderstorm," Blakeslee says. "It may be that there's very little current flowing out of the top of the storm, but if you take all the thunder clouds over the whole earth that are producing that small amount of current, it may very much account for this discrepancy in the atmosphere's electricity budget."

Where does this current come from? Blakeslee suggests one possibility.

"When the storm's electric fields get strong enough, the earth's surface under the storm becomes charged. Grass, trees, people and everything start giving up a charge that flows up into the atmosphere. Sometimes that's manifested in something that can be seen like St. Elmo's Fire. Generally you don't see it, but it's occurring all the time under storms," he says.

The hunt to quantify this missing current continues. Blakeslee's team is still processing the data they gathered, and they hope to publish some of their results within the next few months. One thing their research has already shown, though, is the usefulness of these unmanned aircraft.

"These unmanned craft are an important new tool for studying storms," he says. "They allow us to have much longer and more continuous observations compared to manned airplanes, so they give us a fuller picture of what's going on." 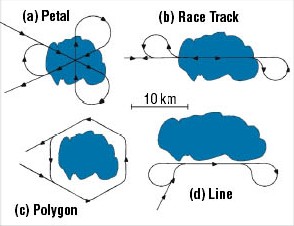 Left: Some of the flight patterns used during the storm observations. Image courtesy NASA.

The UAV flies much slower than normal planes (150 mph vs. ~500 mph) and can turn around much quicker. So while a manned plane would quickly zoom over a storm and then spend a long time turning around for another pass, UAV's can simply do slow "figure 8's" over the storm for hours, gathering data continuously.

Geosynchronous satellites can also provide a continuous view of storms, but these little remote-controlled planes offer some advantages.

"The UAV flies in the midst of the electrical and magnetic fields. Because it's so close to the storm it can pick up very small optical signals that distant satellites would miss," Blakeslee says.

"So there is a place in the future for UAV aircraft that could continuously observe storms," he says, which will help scientists get a clearer view of the hidden electrical life of thunderstorms.