Earthquake Forecast Program Has Amazing Success Rate
A NASA funded earthquake prediction program has an amazing track record. Published in 2002, the Rundle-Tiampo Forecast has accurately predicted the locations of 15 of California's 16 largest earthquakes this decade, including last week's tremors. 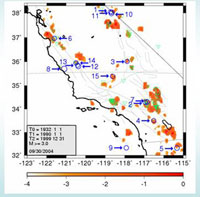 Image to right: Fifteen large earthquake events over a 5 magnitude occurred in Calif. or So. Calif. They are depicted above by the blue circles numbered 1-15. The most recent 11 events, numbered 5-15, occurred after the research was published on February 19, 2002 in Proceedings of the National Academy of Sciences USA. Click on image to enlarge and to view the magnitudes of the various earthquakes. Credit: UC Davis

"We're elated our computer modeling technique has revealed a relationship between past and future earthquake locations," said Dr. John Rundle, director of the Computational Science and Engineering initiative at the U.C. Davis. He leads the group that developed the forecast scorecard. "We're nearly batting a thousand, and that's a powerful validation of the promise this forecasting technique holds," he said.

Of 16 earthquakes, magnitude 5 and higher since Jan. 1, 2000, 15 fall on "hotspots" identified by the forecasting approach. Eleven of the 15 quakes occurred after the paper was published in Proceedings of the National Academy of Sciences in Feb. 2002. The scorecard uses records of earthquakes from 1932 onwards to predict locations most likely to have quakes of magnitude 5 or greater between 2000 and 2010. According to Rundle, small earthquakes of magnitude 3 and above may indicate stress is building up along a fault. While activity continues on most faults, some of those faults will show increasing numbers of small quakes, building up to a big quake, while some faults will appear to shut down. Both effects may herald the possible occurrence of large events.

Image to left: This January 25, 2004 photo shows historic structures and a vehicle damaged in downtown Paso Robles from the 6.5 San Simeon Earthquake. Click on image to enlarge. Credit: Dane Golden/FEMA

JPL software engineer Jay Parker said, "QuakeSim aims to accelerate the efforts of the international earthquake science community to better understand earthquake sources and develop innovative forecasting methods. We expect adding more types of data and analyses will lead to forecasts with substantially better precision than we have today."

The scorecard forecast generated a map of California from the San Francisco Bay area to the Mexican border, divided into approximately 4,000 boxes, or "tiles." For each tile, researchers calculated the seismic potential and assigned color-coding to show the areas most likely to experience quakes over a 10-year period.

Image to right: This is a collapsed section of the Cypress viaduct of Interstate 880 in Oakland, from the Loma Prieta California, Earthquake October 17, 1989. Click on image to enlarge. Credit: USGS, H.G. Wilshire

"Essentially, we look at past data and perform math operations on it," said James Holliday, a U.C. Davis graduate student working on the project. Instrumental earthquake records are available for Southern California since 1932 and for Northern California since 1967. The scorecard gives more precision than a simple look at where quakes have occurred in the past, Rundle said.

"In California, quake activity happens at some level almost everywhere. This method narrows the locations of the largest future events to about six percent of the state," Rundle said. "This information will help engineers and government decision makers prioritize areas for further testing and seismic retrofits."

So far, the technique has only missed one earthquake, a magnitude of 5.2, on June 15, 2004, under the ocean near San Clemente Island. Rundle believes this "miss" may be due to larger uncertainties in locating earthquakes in this offshore region of the state. San Clemente Island is at the edge of the coverage area for Southern California's seismograph network. Rundle and Holliday are working to refine the method and find new ways to visualize the data.

Image to left: Collapsed and burned buildings shown at Beach and Divisadero in the Marina District, San Francisco. Click on image to enlarge. Credit: USGS, C.E.Meyer

For more information check out these related links:

Updated Version of the Scorecard Map