NASA Scientists Get Fix on Food, Wood, and Fiber Use
NASA scientists working with the World Wildlife Fund and others have measured how much of Earth's plant life humans need for food, fiber, wood and fuel. The study identifies human impact on ecosystems.

Satellite measurements were fed into computer models to calculate the annual net primary production (NPP) of plant growth on land. NASA developed models were used to estimate the annual percentage of NPP humans consume. Calculations of domesticated animal consumption were made based on plant-life required to support them.

Image to right: This figure shows the global distribution of resource consumption as measured by the amount of net primary production (NPP) appropriated by humans. Global annual NPP refers to the total amount of plant growth generated each year. Plant growth may be measured in terms of grams of carbon used to build stems, leaves and roots. The darker areas on the map indicate greater appropriation of NPP by humans. Click on image to enlarge. Higher resolution image (3.3 MB) Credit: NASA

Image to left: This figure shows human appropriation of net primary production (NPP) as a percentage of the local NPP. The map provides insight into the percent of plant resource used by people in an area compared to the amount of plant resource that is actually available locally. Click on image to enlarge. Higher resolution image (4 MB) Credit: NASA

The study did not take into account NPP from the ocean. It also did not include how trade between regions impacted equations. To map land NPP, researchers entered into a model a global satellite derived vegetation index and climate data from 1982 to 1998. The data came from the Advanced Very High Resolution Radiometer on the National Oceanic and Atmospheric Administration Polar Orbiting Environmental Satellites. The multi-year data set was processed at GSFC.

"This study uses the considerable technological assets of NASA's Earth Science Enterprise to better understand how we can maintain the highest possible production of food and fiber while still preserving our biological assets in the face of global change," Imhoff said. 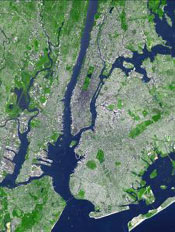 Image to right: This ASTER (Advanced Spaceborne Thermal Emission and Reflection Radiometer) image shows New York City and the Island of Manhattan, bordered by the Hudson and East Rivers. The study finds that people in some urban areas with very high population densities need 300 times more plant-derived resources, or net primary production (NPP), than the local area produces. The image covers an area of 27 x 37 km, and was acquired September 8, 2002. ASTER is an imaging instrument that is flying on Terra, a satellite launched in December 1999 as part of NASA's Earth Observing System (EOS). Click on image to enlarge. Credit: NASA/GSFC/METI/ERSDAC/JAROS, and U.S./Japan ASTER Science Team

By understanding patterns of consumption, and how the planetary supply of plant life relates to the demand for it, these results may enable better management of Earth's rich biological heritage. Understanding the patterns of supply and demand is critical for identifying areas of severe human impact on ecosystems and planning for future growth.

Image to left: This image shows the rain forest canopy north of Manaus, Brazil. Humans in sparsely populated areas with very high productivity, like the Amazon, use very little of the region's NPP. As a result, human appropriation of NPP for the Amazon region equals close to nothing. Click on image to enlarge. Credit: NASA LBA-ECO Project

Population plays an important role. Americans consume more than individuals in developing countries, yet U.S. population density is generally lower. Technology helps reduce waste. For example, due to better technology, one ton of milled lumber requires 1.3 tons of trees in industrialized countries but more than 2 tons of trees in developing countries. As a technologically advanced country, U.S. use of NPP is close to the global average.

East and South Central Asia contain almost half the world's population and appropriate 72 percent of regional NPP, despite consuming less per person than any region. If developing nations raised consumption to match the developed world's use per person, humans would consume more than 35 percent of the total annual land NPP.