Grow Text SizeShrink Text Size
Asteroid Nudged by Sunlight: Most Precise Measurement of Yarkovsky Effect
Scientists on NASA's asteroid sample return mission, Origins, Spectral Interpretation, Resource Identification, Security, Regolith Explorer (OSIRIS-REx), have measured the orbit of their destination asteroid, 1999 RQ36, with such accuracy they were able to directly measure the drift resulting from a subtle but important force called the Yarkovsky effect – the slight push created when the asteroid absorbs sunlight and re-emits that energy as heat.

"The new orbit for the half-kilometer (one-third mile) diameter 1999 RQ36 is the most precise asteroid orbit ever obtained," said OSIRIS-REx team member Steven Chesley of the NASA Jet Propulsion Laboratory, Pasadena, Calif. He presented the findings May 19 at the Asteroids, Comets and Meteors 2012 meeting in Niigata, Japan.

Observations that Michael Nolan at Arecibo Observatory in Puerto Rico made in September 2011, along with Arecibo and Goldstone radar observations made in 1999 and 2005, when 1999 RQ36 passed much closer to Earth, show that the asteroid has deviated from its gravity-ruled orbit by roughly 100 miles, or 160 kilometers, in the last 12 years, a deviation caused by the Yarkovsky effect.

The Yarkovsky effect is named for the nineteenth-century Russian engineer who first proposed the idea that a small rocky space object would, over long periods of time, be noticeably nudged in its orbit by the slight push created when it absorbs sunlight and then re-emits that energy as heat.

"The Yarkovsky force on 1999 RQ36 at its peak, when the asteroid is nearest the sun, is only about a half ounce – about the weight of three grapes on Earth. Meanwhile, the mass of the asteroid is estimated to be about 68 million tons. You need extremely precise measurements over a fairly long time span to see something so slight acting on something so huge."

Nolan and his team measured the distance between the Arecibo Observatory and 1999 RQ36 to an accuracy of 300 meters, or about a fifth of a mile, when the asteroid was 30 million kilometers, or 20 million miles, from Earth.

"That's like measuring the distance between New York City and Los Angeles to an accuracy of two inches, and fine enough that we have to take the size of the asteroid and of Arecibo Observatory into account when making the measurements," Nolan said.

Chesley and his colleagues used the new Arecibo measurements to calculate a series of 1999 RQ36 approaches closer to Earth than 7.5 million kilometers (4.6 million miles) from the years 1654 to 2135. There turned out to be 11 such encounters.

By combining the radar results from Arecibo Observatory with infrared results from NASA's Spitzer Space Telescope, the scientists also learned that asteroid 1999 RQ36 is very light – it has around the same density as water, Chesley reported.

"This study is an important step in better understanding the Yarkovsky effect — a subtle force that contributes to the orbital evolution of new Near-Earth Objects," said Dante Lauretta, the mission's principal investigator and professor of planetary science at the University of Arizona.

Lauretta added that "this information is critical for assessing the likelihood of an impact from our target asteroid and provides important constraints on its mass and density, allowing us to substantially improve our mission design." 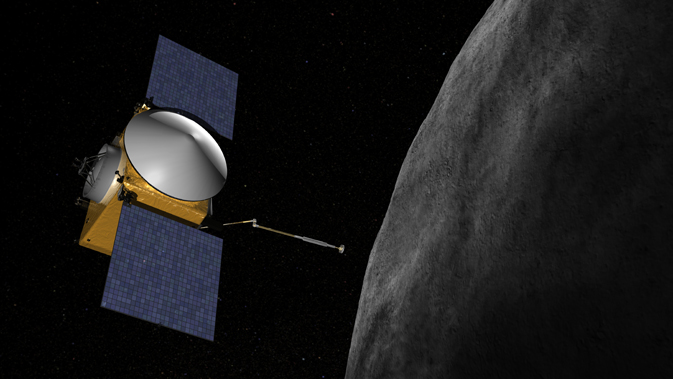 "In addition to the exciting Yarkovsky results, the low density shows that 1999 RQ36 is probably a loose aggregate of rocks--a so called rubble pile," said Jason Dworkin, the mission's project scientist and Chief of Astrochemistry at NASA's Goddard Space Flight Center in Greenbelt, Md. "This makes it an ideal target for OSIRIS-REx to collect loose surface material."

NASA's Goddard is responsible for overall mission management for the OSIRIS-REx project. The Lunar and Planetary Laboratory at the University of Arizona in Tucson leads the science mission. Lockheed Martin Space Systems in Denver will build and operate the spacecraft. OSIRIS-REx is the third mission in NASA's New Frontiers Program. NASA's Marshall Space Flight Center in Huntsville, Ala., manages New Frontiers for the agency's Science Mission Directorate in Washington.

For more information about the OSIRIS-REx mission, visit:

Daniel Stolte
University of Arizona
› Back To Top